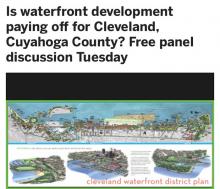 I was very fortunate to see on Twitter an announcement about a very interesting panel discussion. On Tuesday, February 9, 2016, I attended the discussion about recent developments on, and potential future plans for Cleveland's lakefront and riverfront.

Be sure to look at the photos and read the main topic points in the initial event announcement that appeared in Steven Litt's (@Steven_Litt) February 6, 2016, article, Is waterfront development paying off for Cleveland, Cuyahoga County? Free panel discussion Tuesday. I recommend clicking on the links in this article if there are areas of Cleveland's waterfront development with which you are not familiar. I know that I learned some new facts about recent Cleveland waterfront developments by doing so.

By arriving early at Lakewood Public Library (@LakewoodLibrary), I was able to get a good seat for this function, which soon became a standing-room-only event! Take a look at the tweet section of this blog post, to read comments made online by some of the attendees.

Michael Baron (@baronadv1), who is on the Board of Directors of the League of Women Voters of Greater Cleveland as program director, started off the panel presentation with general remarks, including thanking the sponsors and introducing participants.

The panel was moderated by Steven Litt (@Steven_Litt) of The Plain Dealer/Cleveland.com (@ClevelandDotCom) and included:

Thank you to the sponsors for making this interesting event possible:

Even though I had heard about most of the projects separately, it was exciting for me to hear about all of them at one gathering! It was great to hear directly from these panel members, who are intimately involved with these projects.

Rather than repeat what is presented by Steven Litt is his article that summarizes the evening's discussion, I will only mention two items that I did not know about before this evening.

Waterfront development is paying off so well for Cleveland and Cuyahoga County that the area should stop casting envious eyes at Chicago, Pittsburgh, Toronto and other waterfront cities, local leaders say.

The nine takeaways -- read the details and see the photos in the article -- include:

I am excited by the developments that have already been made in the city of Cleveland, and look forward to learning how plans for the future progress over time.

If you missed the Cleveland waterfront panel, I have included a full video of the event here:

Thank you to Michael Baron (@baronadv1), who I contacted about including this video in this blog post. The video is hosted on the Teaching Cleveland YouTube channel. (Learn more about Teaching Cleveland at: TeachingCleveland.org)

Here are my @sos_jr tweets and retweets relating to the panel discussion on Cleveland's waterfront development. I always find it interesting to see what others share during a meeting like this. Please share any tweets with content or photos that you find interesting by retweeting them. Clicking on Twitter photos will enlarge them!

So far #LakeErie is beating the #CuyahogaRiver by a 2 to 1 margin on our waterfront development potential question https://t.co/Xt12kUF3VN

Lake Erie has to be one of Cleveland's key strategic advantages. What's our plan? https://t.co/eKi87Q47oc

If you have anything to say about Cleveland's waterfront, come here & say it. Ideas to build consensus around https://t.co/P60Moon46O

How is #waterfront development paying off for Greater Cleveland? A brief primer: #LakeErie https://t.co/XcmuUdHySn pic.twitter.com/x38Sz7BrqB

.@clevemetroparks As we turn 100 next year we're focused on making connections to Cleveland's waterfront pic.twitter.com/PMkR6VkeXX

Why is important that the lakefront bridge be an iconic $33M design? @GCPartnership: It (& CLE) ought to look cool when the blimp is flying

.@CDICleveland We are the arts, eds & meds area of @DowntownCLE and we're one of the fastest growing neighborhoods. pic.twitter.com/3dDofev4BB

.@DetroitShoreway we have a diverse neighborhood & we're committed to maintaining that. But we're also seeing lots of private investment.

Shoutout to @clevemetroparks from @jennyspencercle of @DetroitShoreway for BIG party on #Edgewater Park Thursdays in summer.

.@DetroitShoreway The state's promise to invest $50M in Shoreway gave developers the confidence to move forward w/projects like Battery Park

Hear idea from #JoeRoman of @GCPartnership to move I-90 south to open access to #Cleveland #waterfront. https://t.co/eyMeqswg0A

Over 150 people are in attendance here tonight at @LakewoodLibrary. Great crowd to see the new look of #Cle pic.twitter.com/V8JbRS3GQ1

#JoeRoman of@GCPartnership says we should spend $33million dollars on the bridge because we need a cool walk to Lake pic.twitter.com/DEDyz4NFvJ

The Waterfront Development Meeting has just started. It is a standing room only crowd. Should be a good conversation pic.twitter.com/BcWgayg7js

.@GCPartnership: @neorsd is a critical partner when it comes to improving the health of #LakeErie and the #CuyahogaRiver

.@jennyspencercle of @DetroitShoreway: People are hungry for a connection to Cleveland's waterfront and Wendy Park is a big asset.

And here comes the Burke Lakefront Airport question! The waterfront development audience seems to have its mind made up.

Thx for the follow @CDICleveland. Looks like you're catching up with a bunch of waterfront development notifications!

So yeah, everybody is at the Lakewood Library for the #lakefront panel discussion @clevemetroparks @steven_litt #cle pic.twitter.com/ctOW556nkf

and a big thanks to our moderator: @steven_litt

In Lakewood on Clevelands lakefront development standing room only pic.twitter.com/Urhaz2GlC5

I decided to list them all to show all the activities happening near our waterfronts and other greenways of Greater Cleveland. Of all the blog posts listed here, the one that I really want you to take time to read is the post about the Eastside Greenway project, that I wrote last September. It is an important project that could tie into our waterfront greenways.

As you can see, I have a strong interest in activities that take place on or near our Cleveland waterfronts. Wouldn't it be great if Cleveland's waterfront venues were all connected by bike paths in greenways?

The FirstEnergy (@FirstEnergyCorp) Lake Shore Power Plant is coming down! Here are some videos and related tweets about the Friday, February 24, 2017, 1:00 AM implosion!

Please retweet any of these that you think your followers would enjoy seeing. Twitter is a great way to share! I HIGHLY recommend watching the videos in these tweets in full-screen mode to get the full effect!

Don't be alarmed! Residents near E 72 and the Shoreway in CLE may hear explosions around 1 a.m. as part of planned demo of Lake Shore Plant.

Check out this bird's eye view of the Lake Shore Power Station demo early this morning in Cleveland. 200+ pounds of explosives were used. pic.twitter.com/5aaXmN3Ecl

The last parts of the Lake Shore Electric Plant were demolished last night. This is a view of the plant from 1948. pic.twitter.com/uAMERocvYR

How much nicer would it be if we still had Lakefront Road running along the lake instead of I-90?

I often lament all the things Cleveland has lost, but that picture also makes me appreciate how much cleaner our air & water is today.