Eastside Greenway - A Vision for a Future Eastside Cleveland Bikeway

The Eastside Greenway project is a great idea, but in some ways I feel that it might be too early to write about it. Today it is just a great idea -- a concept for the future. I look forward to writing again about how the work of today's leaders made a difference in the quality of life.

Just imagine having bike paths that would tie the different eastside communities together! I think it could make a big difference in how the people there will live and interact.

The Eastside Greenway report that is being developed also will include information about the health benefits of a bicycle infrastructure.

Here are the Eastside Greenway vision statement and goals:

Vision: an interconnected system that serves the community with positive health, recreational, transportation and economic benefit

These goals can be found on page 14 of the Public Meeting Presentation, May 2015 PDF. Read this document for interesting facts about this project.

I was excited to read about a public meeting on January 28, 2015, presenting the idea and seeking community input on how best to tie the eastern suburbs of Cleveland together with bike paths. I recommend learning more by reading Steven Litt's (@Steven_Litt) article Preliminary version of East Side Greenway plan ready for public reaction. Be sure to see the Eastside Greenway: Alternatives Frameworks report to the community which is embedded in the article.

I was VERY impressed with the LAND studio (@cleveLANDstudio) one-time spectacular -- AHA! Cleveland -- in August 2014. I was now interested in learning about their role in Eastside Greenway as a project that would have a permanent presence in our community. (Learn about AHA! Cleveland in my blog post: AHA! PechaKucha Night Cleveland VOL 23.)

On Wednesday, January 28, 2015, at 7:00 p.m., I went to the Happy Dog at Euclid Tavern (@HappyDogAtEUC) to learn more. My first time there (I will need to get back again – fun environment) and I was happy to see so many interested people attending. It was standing-room only in the Underdog (Happy Dog's bar in the basement).

The room was filled with engaged people looking at road maps marked with potential parallel bike paths. Display boards showed a variety of options on how these trails could be made to complement the roads and local terrain. (See pages 17-23, Public Meeting Presentation, Jan-Feb 2015 PDF.)

Attendees were invited to put stickers on the display boards indicating what bike path options were most desirable, and on the maps to show what routes would best serve our needs.

To get additional perspective on this and other public meetings read:

Here are my tweets/retweets about the January and February 2015, Eastside Greenway Public Meetings:

Thanks for the great participation in yesterday's #EastsideGreenway meeting. Round two meetings will be in January. pic.twitter.com/JeZdQ15f9c

Your input is needed in the second round of #EastsideGreenway public meetings, coming up soon: http://t.co/LjcZrmgRE4 pic.twitter.com/l6us1yTNyT

In addition to the public meetings, you can share your thoughts by completing an #EastsideGreenway survey: https://t.co/VZdociB41U

Voting time! What do U want to for #bike lanes in Eastside Greenways? https://t.co/mr2O0U2X9v @cleveLANDstudio mtg pic.twitter.com/QpqGujtpJk

If U did not vote tonight, come Thurs 1/29 at @CuyahogaLib Beachwood to @cleveLANDstudio mtg on Eastside Greenways https://t.co/mr2O0U2X9v

Think warm thoughts and help us plan the #EastsideGreenway at a public meeting at @WaterlooBrew, 7-9 p.m. tonight : http://t.co/dsH5J8VKfr

Thanks for all the feedback at #EastsideGreenway public meetings. The third & final round of meetings will be in May. pic.twitter.com/6Udl2vDGzg

This round of #EastsideGreenway public meetings is over, but it's not too late to share your thoughts. Survey: https://t.co/eT9ui8dYeq

.@cleveLANDstudio U R welcome. Any way I can promote this important work on Twitter, please let me know.

.@cleveLANDstudio The tweet where I mention to others about your #EastsideGreenway is in #Cleveland #TweetUp post http://t.co/bj03b5pIXe

Take the survey and tell planners what you think about the #EastsideGreenway trail link project: http://t.co/4GhL0v8fZV #18EasternSuburbs

Round 3 #EastsideGreenway meetings continue tomorrow at the Collinwood Recreation Center and Wed at @BottleHouse1. pic.twitter.com/AJ91IDf4zT

On July 21, 2015, I was very pleased with the number of attendees at John Carroll University (@JohnCarrollU) for the Eastside Greenway report to the community. It was particularly good to see city officials from the eastside suburbs which would contain and maintain the bike paths, along with representatives of partner organizations like the Cleveland Metroparks (@CleveMetroparks).

Learn more about the meeting from Steven Litt's (@Steven_Litt) article that I read before attending the event: Tuesday unveiling set for Eastside Greenway vision as backers pivot to making plan a reality

I was also glad to learn at this meeting that the Northeast Ohio Regional Sewer District (@neorsd - @WallyWaterdrop) and Greater Cleveland Regional Transit Authority (@GCRTA) were project partners. It is good to know that the Eastside Greenway project has engaged partners who will be looking at the issues of runoff water pollution, and community-wide transportation needs. (If you are interested in learning more about the Northeast Ohio Regional Sewer District's work to keep our water clean, please see my blog post: Visiting Wally Waterdrop - NEORSD Open House.)

The Cuyahoga County Planning Commission @CountyPlanning) and the Northeast Ohio Areawide Coordinating Agency (NOACA -@NOACA_MPO) were the lead agencies presenting at this meeting. As part of the meeting, it was stated that LAND studio (@cleveLANDstudio) would most likely be charged with the responsibility of developing the plan for the next steps in the implementation of the project. 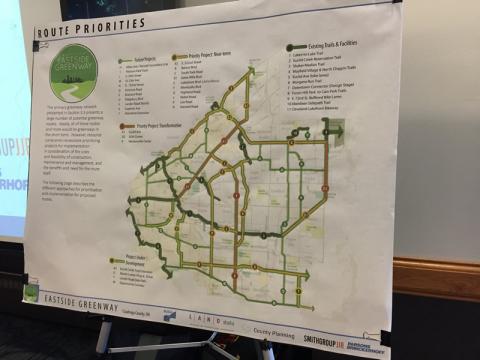 Here are my tweets/retweets regarding the Eastside Greenway report to the community, and other related announcements since the meeting:

Good to see some representatives from east-side cities and local parks at this #EastsideGreenway meeting tonight. pic.twitter.com/y4fh5N4Cbq

Looks like recommendation from #EastsideGreenway will be that @cleveLANDstudio will take leadership role for project pic.twitter.com/klZorZphTN

#EastsideGreenway is making greater progress than originally planed! Start to project and amount of interest is good. Via @countyplanning

Shooting continues on our public awareness campaign. Look for it soon on TV, radio, billboards, and more! #AllDrivers pic.twitter.com/0fEe2Bvrcy

Healthcare providers very interested in the #EastsideGreenway project. It is a quality of life issue for Greater #Cleveland area. Heath!

Related tweets after the meeting...

.@GatewayCLE I recommended to one of the #EastsideGreenway mtg leaders your "Take A Hike" #Cleveland Flats tours. ...

Thanks for the great attendance at last night's #EastsideGreenway meeting. The final report will be available soon. pic.twitter.com/FmMBQLydkD

@sos_jr It's not quite ready yet. Thanks for checking! @cleveLANDstudio

On September 22, 2015, I went to a related event: @CleveMetroparks Reservation Plan Meeting

The #EastsideGreenway Plan is now online: http://t.co/IpD9VEXzYD Thank you to everyone who provided input. pic.twitter.com/LyktcnofER

On September 21, 2015, I was told by Cleveland Metroparks Senior Strategic Park Planner Kelly Coffman (@kbcoff) that she had received an email that day saying the final report was ready for the public.

The next day I saw the following announcement in this tweet:

The #EastsideGreenway Plan is now online: http://t.co/IpD9VEXzYD Thank you to everyone who provided input. pic.twitter.com/LyktcnofER

I have included the EastSide Greenway Plan PDF here: 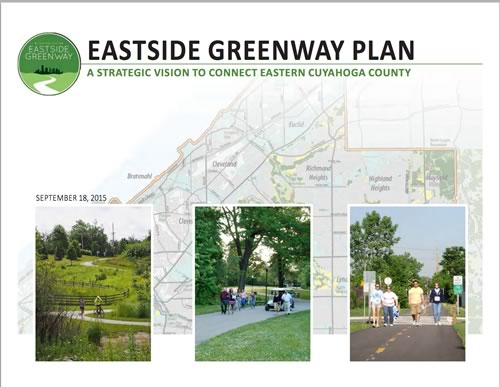 As I mentioned at the beginning of this blog post, while it is the final report for this part of the project, it is actually the starting point for making the vision of an eastside bike system a reality.

I look forward to the day that I will be able to write a follow-up blog post in the future saying how today's leaders' wise stewardship of this idea led to the reality of a better quality of life in our community.

I drafted this blog post back on August 10, 2015, so I want to mention some positive developments that have transpired since then that relate to the Eastside Greenway project. These are projects that will enhance the experience of a person on the Eastside Greenway by improving adjacent biking destinations.