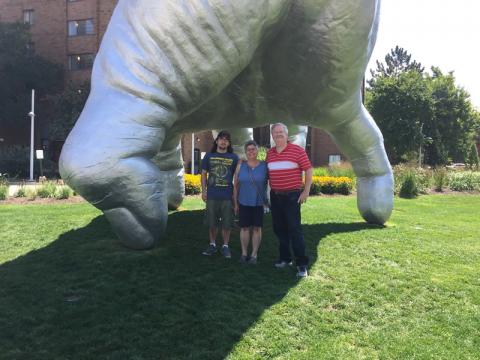 On Saturday, August 4, 2018, I returned to the venues in Uptown Cleveland (@UptownCle) to show my family what I saw on the opening day of  FRONT International Cleveland Triennial for Contemporary Art (@FrontTriennial - #FRONTart2018).

See more details about the area in my opening day blog posts:

I hope you enjoy my photos in these tweets of my return visit to FRONT International Triennial in Uptown Cleveland.

It was great to return to the Museum of Contemporary Art Cleveland, and also to learn about their One Hour/One Work program from their tweet.

Things moving too fast? Enjoy the pleasure and power of slow looking! This is your opportunity to spend focused, quality time discovering and discussing one work of art with a Museum Educator and other curious audience members.

Free First Saturdays are made possible by: PNC

Today’s One Hour/One Work program (11:30 AM, FREE) features the hypnotic 3-D film by #CyprienGaillard. There’s much to be seen within this work! Join us! https://t.co/0YBs8ruyQr

@MOCACleveland, after seeing your tweet about “One Hour/One Work,” my family just attended — “discovering and discussing one work of art with a #Museum Educator” about @FrontTriennial #FRONTart2018 #3D #film by Cyprien Gaillardhttps://t.co/8cqDv2FBCxhttps://t.co/M5E0TEUaBo pic.twitter.com/iIeELBtfR5

Bill Livingston shares stories from the life of #JesseOwens today at MOCA during Free First Saturday. Every month MOCA is free + open to all to hear exciting talks, explore our galleries, and take a closer look during drop-in tours. Thanks to @PNCBank for making this possible! pic.twitter.com/UOSaVZOx18

Thank you for joining us today! So happy to be able to open our doors to #Cleveland every month thanks to @PNCBank

So much to see @MOCACleveland today. Favorite among many excellent works: the 3D film Nightlife by #CyprienGaillard, which was hypnotic and beautiful. pic.twitter.com/7ryzlXgfjZ

Thanks to everyone who joined us to hear Bill Livingston and Tyrone Owens, a cousin of #JesseOwens and former track coach at Rhodes High School, discuss the legacy of the legendary Olympic athlete from #Cleveland. pic.twitter.com/XUocEFMx90

A tree gifted to #JesseOwens is featured prominently in Nightlife, a 3D film by Cyprien Gaillard, which is on view at MOCA as a part of #FRONTart2018. That tree still stands today at Rhodes High School in Cleveland. pic.twitter.com/ITbBICyTzU

Tweets I created as I was writing this blog post about @MOCACleveland.

I woke up over an hour ago, and started to work.

I have been very busy, so used the early morning time to do some writing and plan my big day. I have so much I want to do, so working to make good use of my time.

It is great to see that @MOCACleveland liked this tweet, since I am writing about returning to @UptownCle to take my family to @MOCACleveland to see @FrontTriennial. https://t.co/YVPO7GoVfX

I enjoyed returning to the Cleveland Institute of Art, since I saw some artwork I had missed on the opening day:

I have been to FRONT Porch several times these past months for different FRONT International Triennial programs, but this was my first day visiting since the opening. It was great to show my family where some of the artists live and work. In my mind, FRONT Porch in the Cleveland Glenville neighborhood is the hub from which FRONT International Cleveland Triennial for Contemporary Art grows.

Don't forget that @FrontTriennial resides in #Glenville. This sculptural bricolage, by local artist, Dale Goode, can be found at 1474 E. 112th St. In the process of capturing these photos, I met some awesome neighbors that own the home next door. Lots of community excitement. pic.twitter.com/JCdNeYxkey

Since the opening of the FRONT International Triennial on Thursday, July 12, 2018, I have visited over seven venues. Please read about the opening day and about the venues I visited in my six (so far)  FRONT related blog posts by clicking here. Thank you.