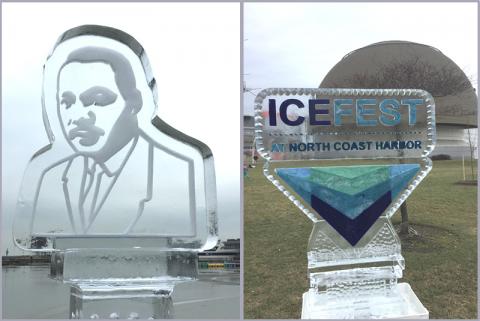 We have really enjoyed attending the North Coast Harbor (@NCoastHarbor) Ice Fest in the past, but normally only came to the event in the evening to see the final ice sculptures. If you have never seen the beautiful carved ice lit up at night, you really should.

This year, the Ice Fest took place on Martin Luther King, Jr. Day, Monday, January 16, 2017. It was combined with the annual free admission to two great Cleveland institutions for the MLK holiday -- Great Lakes Science Center (@GLScienceCtr) and Rock & Roll Hall of Fame and Museum (@RockHall) -- that are located on North Coast Harbor. 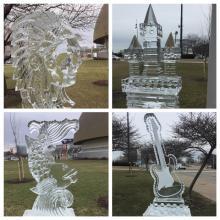 Not only did we appreciate the fun day, but we also want to thank North Coast Harbor for choosing our photos as winners in their 2017 #CLEicefest #CityMeetsLake Social Media Photo Contest. The North Coast Harbor Project Manager, Jessica Kerr (@_JessicaKerr), arranged for us to receive a very nice Cleveland Cavaliers (@Cavs) swag bag full of gifts from North Coast Harbor and the Cavs. 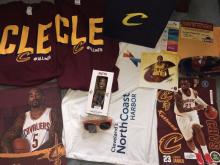 A photo posted by North Coast Harbor CLE (@ncoastharbor) on 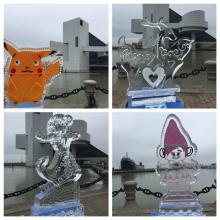 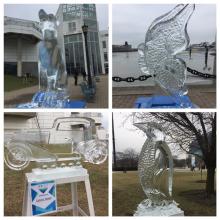 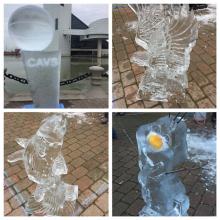 In addition to seeing the finished ice sculptures, we saw live ice carving demos at North Coast Harbor Ice Fest. Also at the event, The Snow Sisters characters did an excellent job of interacting with the children attending the Ice Fest.

Here are all 45 of our photos from this year's event:

If you enjoyed viewing these ice creations from the 2017 Ice Fest, be sure to view our past Ice Fest blog posts listed below with many more photos. 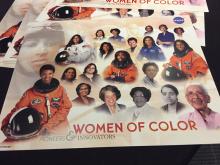 We always enjoy visiting the Great Lakes Science Center (@GLScienceCtr) with its NASA Glenn Visitor Center (@NASAglenn) and many other exhibits. It is so great that they open their doors to the public free of charge on Martin Luther King, Jr. Day!

See the five Great Lakes Science Center blog posts listed below to learn more about this great community STEM resource here in Cleveland. In particular, we want to note that at the 2014 Cleveland Foundation Centennial event (@CleveFoundation), we learned that the Cleveland Metropolitan School District (@CLEMetroSchools) has a special MC2 STEM (9-12) program within the Science Center. We think that is great!

Free Day at Rock & Roll Hall of Fame and Museum 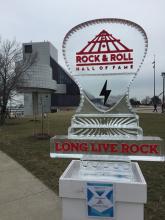 Of all the great things we did on this Martin Luther King, Jr. Day, the activities at the Rock & Roll Hall of Fame and Museum (@RockHall) were the most impressive to us, considering the importance of MLK Day. The activities were a powerful way of tying the mission of the Rock Hall to what the day means to our nation.

One of the events we attended that we really need to mention was a staff-led talk called "Rock & Roll And The Civil Rights Movement." It was a very powerful talk -- emotional for the attendees -- showing how music was used to push for social justice. It is amazing how music can be so powerful in telling a social justice story.

Here is the official mission of the Rock & Roll Hall of Fame and Museum, and the description of the activities for the day:

The Rock & Roll Hall of Fame's mission is to engage, teach and inspire through the power of rock & roll.

FOSTER THEATER: FOURTH FLOOR - Seating is limited. Attendance will be on a first-come first-served basis

10:15am
FILM: SELMA
The film chronicles the tumultuous three-month period in 1965, when Dr. Martin Luther King, Jr. led a dangerous campaign to secure equal voting rights in the face of violent opposition.

12:30pm
LADIES FIRST: WOMEN IN HIP-HOP
Learn about the women who shaped hip-hop from its inception to now. Listen to the music of Roxanne Shanté, MC Lyte, Queen Latifah, Salt ‘n Pepa, and Missy Elliot and learn about these artists’ creativity and ingenuity.

1:15pm
CLEVELAND IS THE CITY
Explore the history of soul and rhythm and blues music in Cleveland, one of the cities that gave birth to rock and roll music. Listen to artists from Screamin’ Jay Hawkins to LeVert to Kid Cudi and venues such as Leo’s Casino that helped to create Cleveland’s culture.

2:15pm
ROCK & ROLL AND THE CIVIL RIGHTS MOVEMENT
Learn how a range of artists, from Mahalia Jackson and Sam Cooke to Berry Gordy at Motown and rock & roll pioneer Fats Domino created a popular music that empowered African Americans to take their rightful place in American society.

In addition to the educational programming and live entertainment, visitors can participate in numerous family activities including making their own protest signs. Visitors can record oral histories of their experiences with Civil Rights and Cleveland music with recording engineer Ben Smith of Collinwood’s Splice Cream Truck in the Rock Hall’s Alan Freed radio studio on the 5th Floor.

Service in the spirit of Dr. King

The Rock Hall will also take donations of hats, scarves, gloves and other cold weather clothes. All donations will be made to St. Agnes Our Lady of Fatima. Visitors can decorate gift bags with notes of love and encouragement.

Here are our 62 photos from Martin Luther King, Jr. Day at the Rock & Roll Hall of Fame and Museum:

Here are our @sos_jr tweets and retweets in which we shared our experiences of the day. Please share any photos and videos that you find interesting by retweeting.

You will notice the first tweet is a message to us inviting us to Ice Fest 2017. We really want to thank @NCoastHarbor for such individualized service using Twitter, and again state how we appreciate being honored as winners of the Social Media Photo Contest.

:) @CMEvents_SamCar yes they are! Don't miss their awesome work eith us Jan 16 @ncoastharbor for #cleicefest 20+ pieces on display!

Looking to up your #cavs swag? Join our photo contest for a chance to win some baller items details at https://t.co/CzRVL3A5qk #CLEicefest pic.twitter.com/f98inpGikg

Exposure to music at a young age can improve academic success. RT if you support music & arts in the classroom. https://t.co/f34aINS4pR pic.twitter.com/bqmgrJlqB6

We have ice, princesses & giant jenga.. how are you spending #MLKDAY #cleicefest pic.twitter.com/S4U0ZxIHRb

Thanks @browns for your support @ #CLEicefest @ North Coast Harbor https://t.co/KsnpBxnc7x

I always like seeing #Ohio #astronauts display when visiting the @NASAglenn Visitor Center in @GLScienceCtr!

Still plenty of time to stop by and visit during #ICEfestCle @NCoastHarbor. Free admission! #CitymeetsLake

I noticed that #StayCuriousCLE demos at @GLScienceCtr always have a finale that involves fire.

We're LIVE at the @RockHall for a Martin Luther King Jr. Day event! Check it out here! https://t.co/GTfcX8dzPF #MLKDay

Let's not forget what today is about, thank you Dr. King #MLKDAY #cleicefest #citymeetslake @… https://t.co/o7oeWcee6M

Hear and talk about song at @RockHall talk for #MLKDAY.

Enjoying @BobDylan at @RockHall on #MLKDAY.

Love the crowd for today's "Under Pressure" show! #StayCuriousCLE pic.twitter.com/o7q6MfbWuO

"The first amendment should not apply to Rock and roll"

Free museum day in #cleveland! Thanks @GLScienceCtr and @rockhall for a fantastic day of learning, exploring and fun. pic.twitter.com/A8QHibFRBF

I can't count how many times I cried today @rockhall pic.twitter.com/nL1KNwubSB

Celebrating #MLKDAY at the @rockhall! Alta is sharing her #Cleveland music memories of singing here with @SoRCleveland. pic.twitter.com/9jYohVUwuG

Sitting with babe in the @AltPress room at the @rockhall. We might not move for the rest of the day. Hes blown away that they are CLE based.

ICE FEST exhibit outside next to the @RockHall - very cool! #MLKDAY pic.twitter.com/ukV8fJiFQH

@sos_jr thanks for all the #cleicefest love. You're one of our official social media photo winners PM us your email

We enjoy it every year! https://t.co/l8D9OwVfNW

and thanks @RockHall for great free day of #LongLiveRock activities on this #MLKDAY. https://t.co/4kSA5TB6Ym pic.twitter.com/2PNjnQ9zxe

The @NASA_GVIS is happy to provide opportunities for students to do public outreach https://t.co/O5BSlvZSxD

I'll be sharing pics in blog post about my great day at @NCoastHarbor for MLK Day pic.twitter.com/BEBp33edEv

We cant get over the #PokemonGO character our ice carvers #eleglanticecreations made us this week #CLEicefest did u see it? Tag us pic.twitter.com/p3d02wFwZ4

If you enjoyed our photos from the 2017 North Coast Harbor (@NCoastHarbor) Ice Fest, please be sure to see more photos in these blog posts:

Read about some of the many Great Lakes Science Center (@GLScienceCtr) and NASA Glenn (@NASAglenn) activities that we have attended in these blog posts:

In our Cleveland Shines at the Republican National Convention blog post, we wrote about a great event that Stuart attended at the Rock & Roll Hall of Fame and Museum (@RockHall) called "Snapchat Celebs." It is interesting that, on Martin Luther King, Jr. Day 2017, the Rock Hall had talks about the politics of protest songs, and during the Republican National Convention, they sponsored a talk about using social media to cover politics -- a very engaging role for the museum.