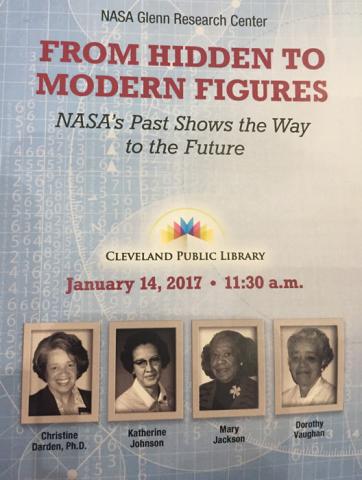 We were really excited when we saw the Cleveland Foundation Center's (@FCCleveland) tweet announcing that the Cleveland Public Library (@Cleveland_PL) and NASA Glenn Research Center (@NASAglenn) would be sponsoring the program NASA From Hidden Figures to Modern Figures on Saturday, January 14, 2017. Having attended and having written previous blog posts about tech events at the Cleveland Public Library and about NASA Glenn Research Center, we knew we needed to clear our calendars to attend this event. 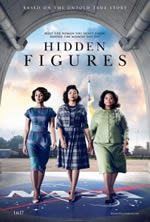 More than half a century ago, three brilliant African American women crossed all gender and race barriers to launch John Glenn and the United States into space.  Their untold story is now being told in the feature film Hidden Figures, starring Taraji P. Henson, Octavia Spencer and Janelle Monáe. Join NASA and the Cleveland Public Library in celebrating the stellar achievements that allowed America to shoot for the moon and beyond. Enjoy video presentations and a discussion panel featuring female leaders in the field: Dr. Christine Darden, Dr. Carolyn Williams, and Dr. Marla Pérez-Davis. Visitors will also have opportunities to meet NASA subject matter experts and enjoy exciting exhibits, a photo booth and activities for the whole family.

We had already heard excellent feedback via social media about the movie Hidden Figures (@HiddenFigures), and we decided to see it before the library's Hidden Figures event.

It was interesting to hear the reaction of other people at the theater where we saw the movie. The film was very engaging. People were moved to clap and cheer for the characters during different parts of the movie. 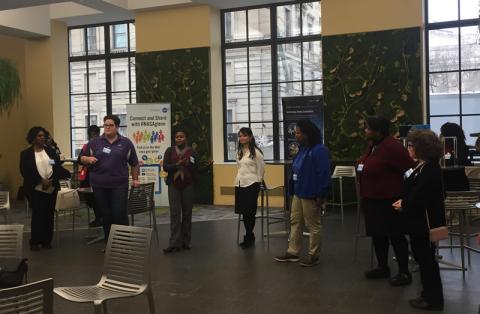 We arrived early for some activities before the panel discussion, since a business associate of Stuart's had sent us a more detailed schedule than was provided on the library website. We want to commend the Cleveland Public Library and NASA Glenn Research Center on how they engaged students, both college and high school, by having them hear from NASA (@NASA) employees about their roles within the agency. The NASA Glenn Research Center staff did an excellent job by not only talking about science and engineering positions, but also made a point of suggesting other fields of study, such as accounting and human resources. 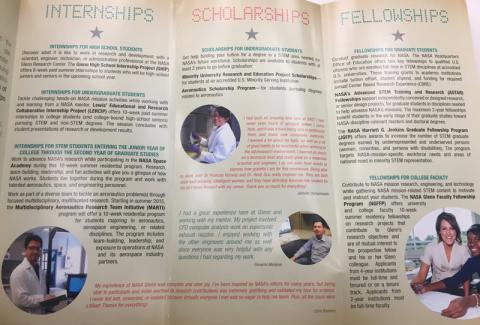 The NASA Glenn Research Center staff emphasized the importance of the their internship program as a means to learn more about NASA, and potentially lead to employment. See these web pages for internship information:

It was great that the library held this part of the event specifically for students. Very impressive! 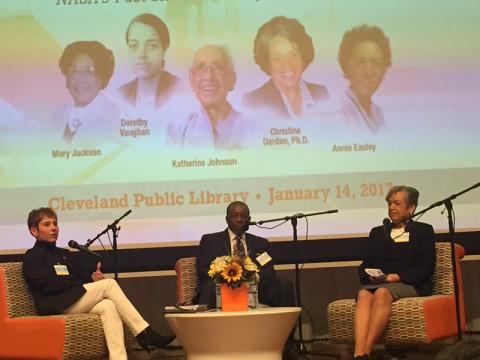 The NASA Hidden Figures Leadership Panel was moderated by Dr. Carolyn Williams, and consisted Dr. Christine Darden, Dr. Marla Pérez-Davis, and Dr. Woodrow Whitlow, Jr. It was interesting to hear their personal stories about the contributions of women of color working at NASA.

Please click on the image below to read the From Hidden To Modern Figures panel program: 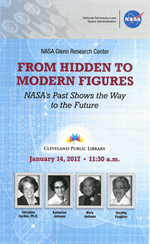 As part of the panel discussion, we learned about the new From Hidden to Modern Figures section of the NASA website, which includes many interesting videos.

Here are our photos from the Saturday, January 14, 2017, NASA and Cleveland Public Library Hidden Figures event.

Here are our @sos_jr 63 tweets and retweets sharing our experience at the Hidden Figures event. Please share any photos and videos that you find interesting by retweeting.

.@Pharrell Thanks for the like! We'd love if you joined us and @NASAglenn as we discuss impact of #HiddenFigures w/ Dr. Christine Darden. https://t.co/JlI1nzjQXT

#HiddenFigures might be the best, most enjoyable, most vital film of the year. No sarcasm. It is a pure celebration of science and equality.

Did you enjoy @HiddenFigures? Join @NASAglenn at Main Library to discuss women who inspired the #HiddenFigures movie. Sat 1/14, 11:30a. pic.twitter.com/QU82iEhNs8

very cool event going on at @Cleveland_PL this weekend. A Discussion of the real story behind Hidden Figures! https://t.co/DRXQyns0zn

Hundreds of CMSD students saw the movie @HiddenFigures today and are attending a STEM-based discussion with a panel of NASA scientists. pic.twitter.com/HwxWMsXhKW

Don't miss it this Saturday! https://t.co/yA0FKNW7I8

Very excited to welcome @NASAglenn back to @Cleveland_PL to discuss Hidden Figures! I won't be here but you should go. Tomorrow at 1130am. pic.twitter.com/0yVEpgjoHV

In this week's issue: The stars of @HiddenFigures on the inspiring women they portray in the film https://t.co/aiHNvbKAH1 #HiddenFigures pic.twitter.com/OxPEeGRNgH

@sos_jr Enjoy the talk tomorrow, Stuart! I saw the movie last weekend. And yes, there was clapping during the movie.

Welcome from @Cleveland_PL to a very full event of people interested in #science and #NASA.

And Saturday morning come to the Main Library downtown for a @HiddenFigures talk with women from NASA! https://t.co/k7Uvi4LDZI https://t.co/K3oiUtEGsd

Hear from @NASA Leadership Panel of importance of parent support of #education & not accept labels. @NASAglenn event at @Cleveland_PL#NASA pic.twitter.com/h4LrlqduZ5

@sos_jr Glad to have met you in person. Thanks for covering the @NASAglenn #HiddenFigures event

A black man practically danced out of Hidden Figures and called it the most joyous film he's ever seen.

This happened on my way into the theater. He also yelled "black women did that!"

This was hands down the most inspirational thing that I've witnessed in years.

Also, Hidden Figures is one of the best films and is now required viewing for everyone.

Saw #HiddenFigures and loved it! We've never needed this movie more than now.

Guys, there's a Boundary Layer Ingestion display at @GLScienceCtr tomorrow! Who wants to go with me? https://t.co/g539SpCWhh

Maybe it's blurry because I was crying. Waterworks, people. Bring tissues. But definitel… https://t.co/W5ga5yQtm8 pic.twitter.com/PADOLlZaop

Please learn more by reading our related blog posts about NASA and tech events at the Cleveland Public Library:

Here are events we wrote about in which NASA participated:

Also, here are some blog posts we wrote about tech events at other area libraries. We are very fortunate to have these resources in our community. 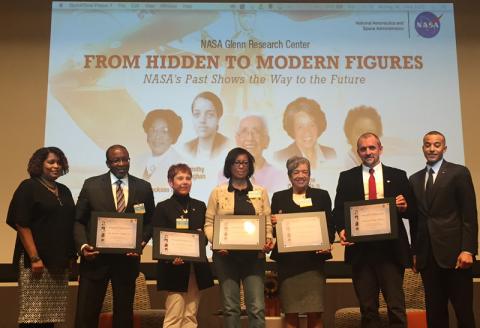 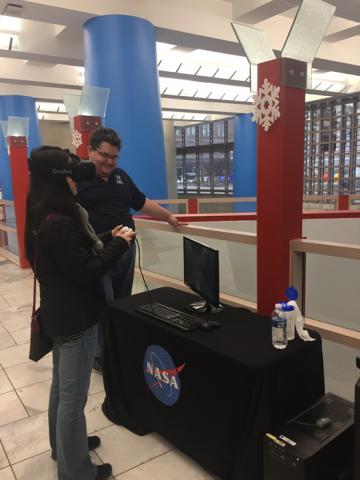 We also want to give a special thanks to Tom Kunsman (@tkunsman) for sending us a link to the upcoming NASA Glenn Tours. Stuart has been following @tkunsman on Twitter since seeing the great information Tom shared at the NASA Glenn Research Center 75th Anniversary Open House and other events. We were glad to finally meet him in person at the library event, and to learn that he now volunteers for NASA Glenn Research Center, sharing his knowledge with others. We recommend following @tkunsman on Twitter.