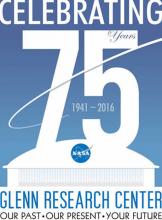 When Stuart saw this headline in a Cleveland Scene article (@ClevelandScene) on March 11, 2016, we knew we had to be there! Our first full blog post was about a tour of NASA Glenn Research Center (@NASAglenn) as part of a Cleveland NASA Tweetup in 2012. We were excited to go back for another tour!

We attended the NASA Glenn Research Center 75th Anniversary Open House at Lewis Field on May 21 and 22, 2016. (There was also a Technology Day on May 24, and an open house in Sandusky on June 11 and 12 at Plum Brook Station, which we were not able to attend.) There was so much to see that the two days just left us wanting to see and learn more.

Some of the exciting things that attendees were able to see included:

Here is the official map and brochure from the open house: 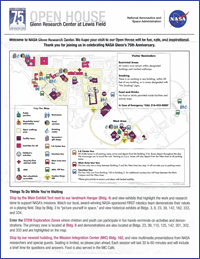 Learn more about all the the 75th anniversary and related events at: www.NASA.gov/glenn75/
Also, see what people have shared about @NASAglenn 75th anniversary on Twitter with the #NASAGlenn75 hashtag. 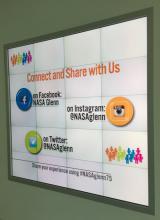 It seemed like all of Cleveland was there -- huge lines just to get on the buses from the I-X Center (@ixcenter) to the NASA Glenn facility. The following are our photos and tweets/retweets from the two days to show some of what took place at this weekend-long event. We hope that the NASA Glenn Research Center makes this an annual event. Clevelanders have a lot of interest in NASA!

Prior to attending the open house, we got even more excited by reading these articles and viewing the related videos (be sure to read them to learn more):

Here are our tweets and retweets from before the open house:

When Stuart was in high school, he had a good friend who was a NASA spaceship expert, who took him to the visitor center that used to be located on the NASA Glenn Research Center (@NASAglenn) property. It was a place that few people knew about, and might have only attracted people who had a strong interest in NASA.

Today, people visiting Cleveland can still go to the NASA Glenn Visitor Center, but it is now part of the Great Lakes Science Center (@GLScienceCtr). This location has the advantage of having more exposure to the public. In addition, the Science Center staff members are trained to provide more interaction with the public, and update exhibits more often.

As we wrote above, our first full blog post was about a tweetup at NASA , which is why were so excited to go back for the open house.

Here are some of our related blog posts:

You can also view all my blog posts at: sosAssociates.com/Blog

We look forward to attending more NASA Glenn Research Center events. Be sure to follow them on social media to learn more. 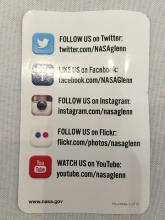