I have attended the grand opening of the Cleveland Public Library (@Cleveland_PL) TechCentral MakerSpace. The technology center staff at the Akron Public Library (@AkronLibrary) gave me a tour during the Akron Maker Faire. Now, I am pleased to be able to write about the Cuyahoga County Public Library's (@CuyahogaLib) new Innovation Center at their Garfield Heights Branch. I was fortunate to be part of a special orientation tour given to members of the Cleveland Digital Publishing Users Group - CDPUG (@CDPUG) for their March 31, 2016, meeting.

In addition to seeing other library systems' tech centers, my interest in Cuyahoga County Public Library's Innovation Center was also sparked by my discussion with the library system's technology staff at the October 18, 2015, opening of the new South Euclid-Lyndhurst Library Branch. At that event, they demonstrated a 3-D printer, but indicated that the printers would only be traveling between libraries. I was told that they had youth classes now, and would have adult 3-D printing classes in the spring.

After the event, I sent a private Twitter message to Cuyahoga County Public Library's Executive Director Sari Feldman (@Sari_Feldman) mentioning that some of the attendees had not previously seen a 3-D printer in person. I let her know that what the library was doing was great, and that since "...the 3-D design software is free & the library is going to be providing free classes to adults starting in spring 2016, there is a great opportunity to educate people."

October 18, 2015 - Some of the Tweets from the South Euclid-Lyndhurst Library Grand Opening

Thank you for being here and joining 3600+ others at the opening. https://t.co/XFUOsvsG9Q

After the opening of the new South Euclid-Lyndhurst Library Branch, I did not expect anything more to happen in relation to library technology resources in the near future. Imagine my surprise when I heard about the opening of Cuyahoga County Public Library's first Innovation Center at the Garfield Heights Branch on February 12, 2016. I was very disappointed that I did not hear about the opening until after it took place, but the photos I saw from the event on Twitter and in articles were exciting.

Here are two articles about the first Innovation Center and plans for two more in the near future. These Innovation Centers are funded by Cuyahoga County (@CuyahogaCounty) and The Cleveland Foundation (@CleveFoundation):

While writing this blog post, I did a search for tweets from the Innovation Center opening, and I found the following. It is interesting to note that CDPUG Past President and current Social Networking Manager (guru) Janet Dodrill was actively promoting the Innovation Center on day one! Be sure to follow both @CDPUG and @JanetDodrill on Twitter.

Mayfield will have an Innovation Center later in Spring! Yea!!! #Cleveland https://t.co/o867QfpXQH 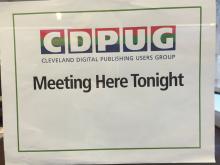 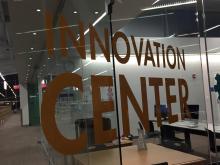 CDPUG Program Director Spike Radway (@SpikeRadway) is great at being on top of creative happenings in Cleveland. That is why so soon after the Innovation Center opening, the CDPUG membership was invited for a private tour and orientation at their March 31, 2016 meeting.

Here is the description from the official Cuyahoga County Public Library Innovation Center web page of all the services at the Garfield Heights Library Branch, interlaced with my photos from the tour.

There is no charge to use the equipment in the Innovation Center. However, users are responsible for the costs of consumable materials (eg. 3-D printing filament, vinyl material, etc), a limited supply of which are available for purchase at the Library checkout desk. We encourage innovators to use their own approved materials for their own projects.

During the tour, we received the following current price sheet:

In addition to these hardware technology resources, the Garfield Heights Library Branch has the software needed to design 3-D objects. Past CDPUG President and current Secretary Henry Lee (@NativeArtzCLE) demonstrated SketchUp - "The easiest way to draw in 3D" - software, which is available at the library.

Please see my notes and photos from the evening in the following tweets. They also include tweets from the "after" meeting, which is a tradition of CDPUG and other great tech groups in our community. This is a chance to talk one-on-one with presenters after the main meeting. If you find any of the information interesting or useful, please retweet to share with others.

At @CDPUG mtg, in addition to orientation of @CuyahogaLib's Innovation Center we will also have #SketchUp #3Ddesign demo by @NativeArtzCLE

Just talk to a @CDPUG member who's doing some interesting work at @NASAglenn with #OculusRift. #NASA Open House: https://t.co/5HTH8g5PxC

At the @CDPUG mtg after the mtg, member telling me about @siggraph's #SIGGRAPH2016 https://t.co/iXZG4o3zo8

@sos_jr @CDPUG @siggraph I always tell members there's value to be gained from after- meeting meetings.

.@SamNasr Strongly agree!! I always tell people to go to after mtgs like @CDPUG's does each month. Best way to learn & build relationships.

"Getting a #wifi #antenna from #pringles tube (#DIY Cantenna)"

.@DaveShah We were just talking about this at the after @CDPUG meeting.

@sos_jr @SketchUp @CuyahogaLib @CDPUG thanks for sharing! Hope all benefited from info shared about #3Dprinting and #SketchUp

@sos_jr Love #SketchUp but love #DazStudio even more! This is what #iray can do for rendering pic.twitter.com/dpht5XX96q

I want to note that my Cleveland Digital Publishing Users Group (CDPUG) membership enabled me to go on this tour and to participate in the software training. CDPUG is a great organization if you like to be with, and learn from, creative people in Cleveland. CDPUG members also benefit by having access to a members-only job bank.

Here is a description of benefits listed on the CDPUG website:

Membership in CDPUG offers tangible benefits for you, your employers, your customers, Northeast Ohio and for the industry as a whole. By promoting excellence and knowledge in visual communications, we provide many opportunities for growth and outreach. Here is a partial list of the benefits of belonging to the Cleveland Digital Publishing Users Group.

Go to CDPUG.org for more information.

The following are blog posts that will give you more information about Cleveland Digital Publishing Users Group - CDPUG (@CDPUG) and technical resources at our area's libraries. Please watch my @sos_jr tweets and see future sosAssociates.com/blog posts for more information.

Three of these blog posts are about presentations I have done at CDPUG's meetings, and one is about a magazine article featuring the past president of CDPUG, the president of Greater Cleveland PC Users Group (GCPCUG), and me. The "Presentation Skills " blog post includes a surprise from CDPUG Program Director Spike Radway (@SpikeRadway) -- he included me in his presentation.

Also, from the 9th Annual CDPUG Showcase, I did an Ignite Talk about Cleveland GiveCamp (@CleGiveCamp):

Cleveland Give Camp
Published on Jun 26, 2013
Stuart Smith talks about Cleveland GiveCamp, a weekend-long event where creative professionals donate their time to create software and web-based applications for non-profit organizations.

(Learn more about Cleveland GiveCamp by visiting the ClevelandGiveCamp.org website, and reading my past blog posts tagged "givecamp.")