DESCRIPTION
We would like to cordially invite you, and any relevant co-workers and colleagues, to BlueBridge Networks third Non-Profit IT Innovation Summit. This lunch and learn is the only one of its kind in the region and promises to provide you with valuable information to help you prepare for the upcoming year in IT. With a strong focus on the non-profit sector in CLE, we will share best practices, new technologies and provide pain point relief for taxed IT departments and budgets...

...BlueBridge Networks is award-winning in the areas of innovation, client service, and philanthropy. We provide world class service in data center services, cloud and cyber security with a specialization in assisting non-profit organizations and helping them meet their IT objectives.

This was the second time I have attended this nonprofit IT summit, having attended in the BlueBridge Networks Non-Profit IT Innovation Summit II on November 5, 2014. I want to thank Kevin Goodman (@KevinGoodmanBBN) for inviting me again, and let the presenters know how much I appreciate them taking time to share their knowledge.

The panel of presenters included: 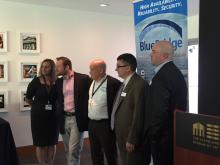 It was interesting to learn more from Niki Krause (@NikiKrause2542) about the technology used at the Cleveland Museum of Art, and then going out into the museum to show the college student who attended with me the new ArtLens Gallery. Niki talked about how the museums' effective use of technology goes way beyond the ArtLens App and ArtLens Gallery, but those items, along with their Drupal website, are what is visible to the public.

Learn more about ArtLens in my July 10, 2017, blog post: Crash Party: Being Among the First to Experience the New CMA ArtLens Gallery One of the great things about attending functions like the Non-Profit IT Innovation Summit is what you learn from other participants during the networking portion of the summit. Here are a few resources that I learned about, which I believe can be useful to nonprofit organizations:

The BlueBridge Networks Third Non-Profit IT Innovation Summit took place the week after Cleveland GiveCamp (@CleGiveCamp), for which I serve on the Steering Committee and the Social Media Team. At the end of the luncheon, Kevin Goodman surprised me by asking me to close the summit by sharing the news about the success of Cleveland GiveCamp 2017.

Twenty-three summit-related tweets! Please share by retweeting those with useful or interesting information!

The free Art lens app makes a visit to the Cleveland Museum of Art much richer. @janecalexander @BlueBridgeLLC

Cleveland Museum of Art is free so it's a challenge to gather visitor data analytics. @BlueBridgeLLC 1

.@DanHanson It was great to talk to you at @BlueBridgeLLC Nonprofit Tech Summit.

Let me know if you post about it on @GreatLakesGeek blog https://t.co/PfsF1R1eUD

Another successful BlueBridge Networks Non Profit IT Lunch and Learn Summit at the Cleveland Museum of Art !
#cloud…https://t.co/jgv18WRocp

Here are other blog posts I have written about BlueBridge Networks events:

I always enjoy visiting the ArtLens Gallery, and often use the ArtLens App. I have written several ArtLens-related blog posts. Read these to learn more about how Cleveland is the first in the nation to have this great resource:

There are many more blog posts that we have written about the Cleveland Museum of Art and other museums in University Circle that you can read here. We recommend following @InTheCircle on Twitter, and exploring University Circle's website: UniversityCircle.org

Disclosure: My guest (a college student who works for me) and I received a free lunch at the Cleveland Museum of Art as a guest of BlueBridge Networks when we attended the BlueBridge Networks Third Non-Profit IT Innovation Summit. I was approached by Kevin Goodman to attend because of my support of  activities in our community relating to technology and nonprofits, which I promote via my @sos_jr Twitter feed and sosAssociates.com blog. I enjoyed this summit and related activities, and wrote this blog to share my experience and information I learned at this event.