Everyone at camp was told that they had to write a blog post about camp, so I decided to write you this letter.

This was my eighth year at Cleveland GiveCamp (@CleGiveCamp), and it started off with a lot of hard work! Kevin (@kefrith) and I had to set up enough chairs for the 200 GiveCampers that were coming for the weekend of July 21-23, 2017. The camp was on a boat and in an airport, which was very cool, except when the air conditioner broke in the airport. Then it was hot! It rained on the campers Saturday night, but everyone stayed dry in their tents. 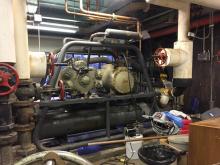 Kevin and I were in the hot airport at the social media table for most of the weekend, which was OK with us, since we heard that one person got seasick on the boat. A different camper on the boat wrote on Slack, “I felt like the room was spinning....I wondered just how much caffeine I’d had.... [Then] I realized, ‘I’m on a boat.’” 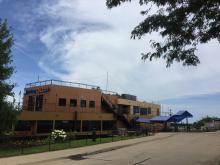 Camp ended up being really fun! Since Kevin and I were on the Social Media Team, we got to play with Twitter, Facebook, and watch fellow campers share photos of their cats and dogs on the #random Cleveland GiveCamp Slack channel! At home, we would get in trouble for playing on the computer this much, but at Cleveland GiveCamp, we were encouraged to stay up late sharing stuff. 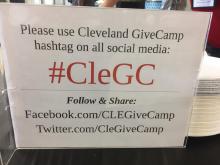 A member of the Social Media Team set up a new Cleveland GiveCamp Instagram account, where they shared lots of great photos from the weekend! Check out our Facebook videos and HUGE Facebook photo galleries for Friday, Saturday, and Sunday! 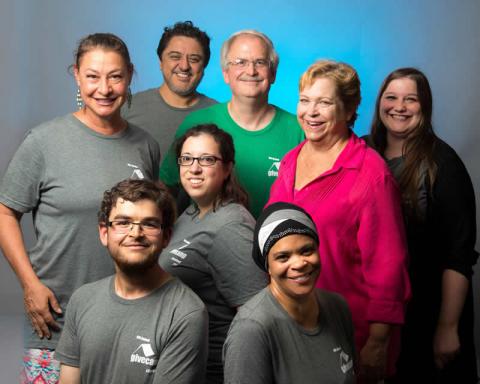 The camp gave a special green shirt to me and the others who were on the Cleveland GiveCamp Steering Committee or were on Team Y -- the tech floaters team. 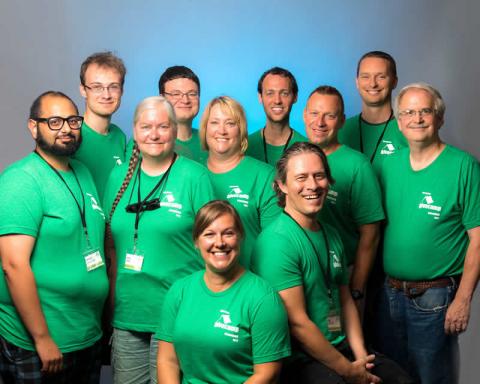 There were 20 other teams who played well together to build 19 really cool websites, and one neato database project for local nonprofit organizations. All our team photos are shared on the Cleveland GiveCamp 2017 Team Portraits album on Facebook. 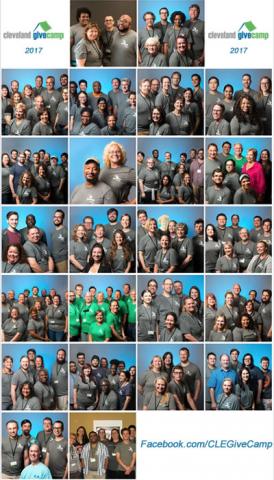 Our favorite team was Team Z! They made us some really great camp food, and even coffee and snacks! The camp food had themes like cookout night, noodle bowl lunch, Hawaiian luau dinner, and leftover surprise along with pizza. The camp counselors surprised us Saturday night with our very own ice cream truck from East Coast Custard (@ECCustard)! 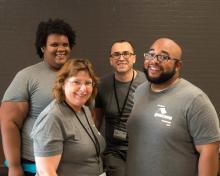 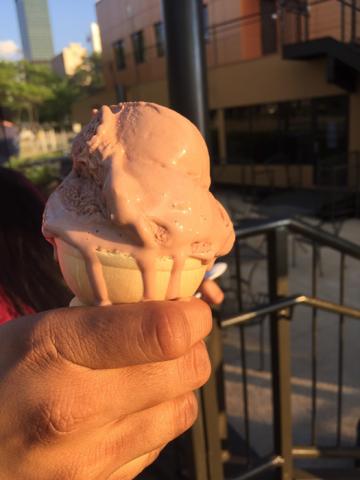 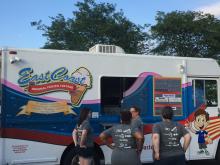 I know I started this letter complaining about the airport and boat, but camp ended up being super fun! We got to go out where REAL airplanes were parked and have our picture taken with all our camper friends! 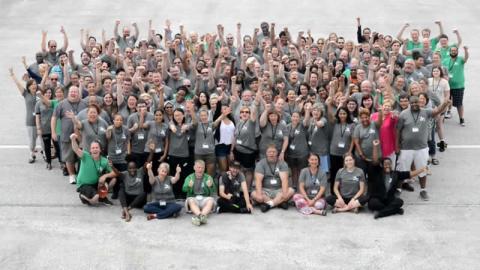 Next door to the boat was a really cool submarine called the USS Cod (@SubmarineCod). We heard that some campers on the boat almost fell out of their chairs when the submarine crew fired a cannon! 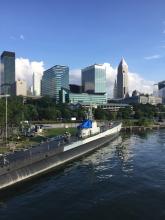 One of the nonprofits getting a new website this year was the International Women's Air & Space Museum (@WomenintheAir) which is a FREE museum right inside Burke Lakefront Airport (@BurkeLakefront), where we did a lot of our camp activities! The airport was full of space stuff from NASA, airplane models (we were told we were not allowed to climb on them), and interesting pictures and facts about women pilots and astronauts. 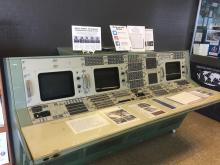 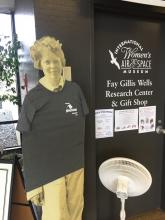 Thanks, LeanDog Software (@LeanDog) and Arras Keathley Agency (@AKACleveland), for letting us play on your boat and watch the pretty sunsets each night. All the campers could not believe that this cool place is where you work. 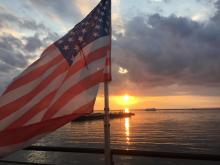 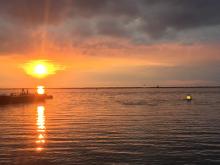 On Saturday night, we even got to see fireworks from on top of the boat! We thought they were for us campers, but found out that it was part of a special 100th birthday party for the Cleveland Metroparks (@CleveMetroparks)! That would be a lot of candles for a birthday cake! 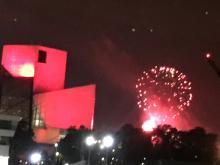 Lots of the campers got to sleep in tents, including Kevin. This is Kevin’s fifth time at Cleveland GiveCamp. He always gets to make a REALLY cool video about camp. He also edited a video for The Valentine Project's (@ValentineProj) Facebook page. 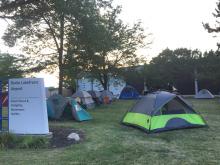 I even get to go to a Cleveland Indians (@Indians) baseball game for FREE, since I volunteered at Cleveland GiveCamp!! Thank you to BVU: The Center for Nonprofit Excellence (@BVUVolunteers) for giving me tickets through the Indians Volunteer Challenge program! If you were at Cleveland GiveCamp with me, here is how to get your tickets!

I sent out a lot of tweets and retweets about Cleveland GiveCamp. Please share the ones you like by retweeting them. Also see all my photos and other camp stuff below.

P.S. Can I go back to GiveCamp next year?

The rest of this blog post contains information about Cleveland GiveCamp 2017.

Victory for all 20 Cleveland GiveCamp Nonprofit Partners for 2017!

We are excited that all 20 projects were successfully completed!

If you know of a nonprofit interested in becoming a Cleveland GiveCamp Nonprofit Partner in 2018, click here and fill out the form!

In addition to the free tech solutions (19 websites and one database project) for the 2017 nonprofits partners, these three nonprofits were awarded a cash prize through the Craze eCool Award 2017:

One of the founders of Cleveland GiveCamp, Andy Craze, lost his battle with cancer in 2016, just prior to GiveCamp. His partner, Jane Winik, along with Simplex-IT’s Bob Coppedge, created the Craze eCool Award in Andy’s memory. In this video, Jane tells the story of the Craze eCool Award: 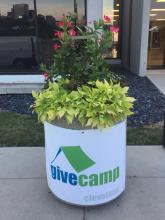 Working on the Cleveland GiveCamp Steering Committee has been very rewarding for Stuart. He has served on boards or in a leadership role in other organizations, but the horizontal structure of this team is unique to his experience.

Each member giving of their time and talent is one of the key reasons that Cleveland GiveCamp has continued to be successful for eight years!

Our son, Kevin Smith, helped to create the official Cleveland GiveCamp 2017 video and a video for The Valentine Project's (@ValentineProj) Facebook page. Kevin also created the Cleveland GiveCamp Facebook Cover Video that is at the top of this blog post.

In case you have not heard the original A Letter from Camp, the Grammy Award-winning novelty song by Allan Sherman, here it is:

Thank you again BVU: The Center for Nonprofit Excellence (@BVUVolunteers) for the Cleveland Indians (@Indians) baseball game tickets through the Indians Volunteer Challenge program! We had a good time at the game!

Here are our tweets/retweets from the evening we attended the game:

Arrived at Progressive Field to #RallyTogether for the #Cleveland @Indians! ️

First pitch will be delayed tonight.

Updates as they are available, friends. pic.twitter.com/RKAoOs6OCH

Black clouds coming in over #Cleveland before @Indians baseball game!

It's the perfect way to spend a rain delay! Thanks for tuning in. Hope you will #RallyTogether soon!

U know of my interest in waterfront & river: https://t.co/TbYSUfDvAH

.@indians are on rain delay, so hop over to our Facebook page and catch our forum on riverfront development! #CityClub pic.twitter.com/tQWHf26Bv5

We're under way at the corner of Carnegie & Ontario! pic.twitter.com/IxbsrXxQEu

When in doubt, trust in Frankie.

His 21st homer puts us on the board! pic.twitter.com/XTFpj7m3f7