On October 27, 2015, we were very fortunate to be invited to attend Case Western Reserve University's think[box] Thinkapalooza!

Even before the new think[box] space opened, we had heard about how great it was going to be. Thinkapalooza was part of the grand opening of Case Western Reserve University think[box]'s new space for promoting innovation and entrepreneurial enterprises. Its new name is the Larry Sears and Sally Zlotnick Sears think[box] and it is located in the Richey Mixon Building. It is one of the largest centers of its kind for an academic institution.

While the Thinkapalooza focused on the creativity of Case Western Reserve University (@CWRU) students, we first want to talk about the larger role of think[box] (@CWRUthinkbox) in the Cleveland entrepreneurial community. think[box] is a resource that will first focus on the students, faculty, and staff of the university, but will also be open to others in the surrounding community.

Case Western Reserve University's center for innovation and entrepreneurship provides a space for anyone - students, faculty, and alumni and members of the community - to tinker and creatively invent. Located in a 7-story, 50,000 square foot facility, with 3 floors occupied and more to undergo renovation soon, this $35M project is one of the largest university-based innovation centers in the world.

Even before attending the Thinkapalooza, we were aware of the think[box] (@CWRUthinkbox) program, and were excited to learn about its expansion and its new location in the Richey Mixon Building.

The thinkbox.Case.edu website does a great job describing think[box]. The most important element to us is explained on the "Who can use think[box]?" slide from the orientation section of the website: 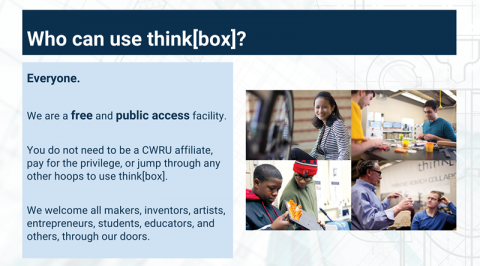 Yes, think[box] is a public place for entrepreneurial creativity! In addition to adult access, they also have policies in place for engaging youth (under age 18)! (See Google Doc: think[box] K-12 Policies.)

Learn more on "How To Start" by viewing the Orientation Presentation and other thinkbox.Case.edu web pages. They provide a wealth of information beyond what we have time to share here.

Here are our photos that show some of the activities by floor that will occur in the building: 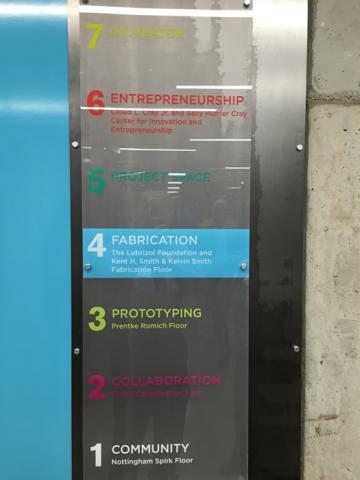 We have only briefly listed the purposes of each floor, and therefore recommend that you read Michael C. DeAloia's (@TechCzarCle) article: Think[box] at Case Western Reserve University serves as a stage for innovation. Michael goes into more detail about the space and its background. We like how he ends his article stating:

This new facility is a grand move forward in Cleveland creating another economic boom. And it could not be a more powerful symbol of the region's intellectual, design, economic and innovative might.

think[box] provides tutorials and training for a wide variety of technical and maker equipment, including:

To learn more about think[box]:

Thinkapalooza After Dark: A Celebration of Innovation

Join us for this marquee event during the Case Western Reserve University Innovation Summit 2015: Models of Innovation. Help us celebrate the new 50,000-square-foot home of think[box]—set to be one of the world’s largest university-based innovation and entrepreneurship centers.

Get an up-close look at think[box]’s new home, including tours of equipment, think[box]-built project showcases, selfie opportunities with the Back to the Future DeLorean and high-energy music and art performances.

All campus and community members are welcome.

It’s an innovation extravaganza not to be missed!

The Thinkapalooza event was incredible! It was over the top with so much to see and do in a short time. For every creative display we viewed, there were at least three more displays and activities that we did not have time to see fully.

It was very exciting to talk to the Case Western Reserve University students from several different disciplines about their creative projects, and enjoy their musical performances.

It was a very student-focused event -- a showcase of their talents. We also found that many of the projects are featured on the Projects at think[box] web pages, and we encourage you to learn more at: thinkbox.case.edu/Projects

Here are some of the featured projects that we saw at Thinkapalooza:

Baymax buddies are pairable teddy bears, able to close the distance between two people without the need for verbal communication. When one bear is hugged, a suite of analog sensors alerts the arduino, which sends a Wi-Fi message to the other bear and that bear will vibrate and vice versa. That way, no matter how far two people are, they can hug the other.

The sensor suite was made from scratch, with each sensor being developed to be soft as to not compromise the huggability of the toy, rather than stock metal sensors. They are comprised mainly of a material called velostat, a pressure sensitive conductive sheet made of polymeric foil impregnated with carbon black. Watch video here.

While we were writing this blog post, we learned that Xyla Foxlin won first place in the CWRU LaunchNet (@CWRULaunchNet) GirlPower Pitch Night (see photo here). The second place winner was Daphne Fecheyr-Lippens (@DaFecheyr) -- learn more about her in our Biomimicry blog post. Congratulations, Xyla and Daphne!

Stuart had originally learned more details about think[box] from Bob Sopko, who is the director of CWRU Blackstone LaunchNet (@CWRULaunchNet). We have seen him participate in local entrepreneur meetings and at IngenuityFest (@Ingenuityfest). Thus, we were very pleased that when he saw us at the event, he made a point of inviting us over to see an exciting invention that he was demonstrating.

Bob had a motorcycle helmet which was treated with LumiLor Electroluminescent Coating System (@LumiLorLabs). Very amazing -- the paint glowed when an electrical current was turned on!

When we let Bob know we were writing this blog post, he was kind enough to email us these LumiLor demo videos:

Thank you, Bob Sopko, for showing us this exciting product.

In addition to the technical talents demonstrated, we also enjoyed the music of Cleveland's South Asian fusion a cappella group -- Dhamakapella (@Dhamakapella). 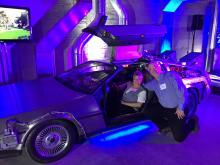 It was fun to talk to the owner, Rick Neumann, and see his photos with Michael J. Fox, Kelly Ripa, and Michael Strahan on the ''Live! With Kelly and Michael'' television show (@RealMikeFox - @KellyRipa - @MichaelStrahan - @KellyAndMichael). Read more in the Penn Hills man goes 'Back to the Future' with 1982 DeLorean article by Pittsburgh Post-Gazette (@PittsburghPG).

Here are all of our photos and videos from the event:

Here are our tweets and retweets regarding the event. Please share with others those that interest you by retweeting.

"Bring the DeLorean back" says @ARPAE's Ellen Williams. And we will at #thinkapalooza tomorrow! Join us. #CWRUinnovation

Great Scott!! I'm sitting in the actual Back to the Future car! #thatsheavydocâ€¦ https://t.co/h300XPerp8

Thx @CWRU for an evening of #CWRUinnovation at @CWRUthinkbox's #Thinkapalooza. We were very impressed with the students to whom we spoke.

#cwru mechanical #engineering students and us making #chocolate with #liquidnitrogen! It's greatâ€¦ https://t.co/s9QuHarGp3

Saw a lot at @CWRUthinkbox's #Thinkapalooza. @WKYC's video shows even more #CWRUinnovation happening at @CWRU. We ran out of time to see all

How innovation @CWRUthinkbox can grow the job market in #CLE: https://t.co/nDVUVCkQeT via @wkyc #CWRUinnovation #CWRU

At Think[box] at Case Western Reserve U for Thinkapalooza. Amazing 50,000 sq ft facility open to public for free. pic.twitter.com/opysPZ4m1U

Thanks @techczarcle! Think[box] at Case Western Reserve University serves as a stage for innovation https://t.co/fuUIhZN867

Here is a list of some of the articles we saw about the Larry Sears and Sally Zlotnick Sears think[box] at the Richey Mixon Building construction and opening. It was very interesting to read about all that went into making this new community resource get off to a great start.

Published on Jul 14, 2015
Case Western Reserve University's center for innovation provides a space for anyone - especially students, faculty, and alumni - to tinker and creatively invent. Housed temporarily in a 4500 square foot space, renovations are underway on a 7-story, 50,000 square foot facility that will make this $35M project one of the largest university-based innovation centers in the world.

Published on Dec 16, 2013
Animated preview of think[box], a center for invention and entrepreneurship within Case Western Reserve University's School of Engineering

We look forward to learning more about CWRU's think[box] and visiting again. It is an amazing resource that will benefit our community into the future.

I have heard some great success stories from students using this new facility. The Dental School is considering getting an open-source piece of software that converts diccom to stl so they can 3D print skulls. Totally cool.