Home » Blog » All Blog Posts » Fun Day! From The Flats to Uptown and Beyond!

Fun Day! From The Flats to Uptown and Beyond! 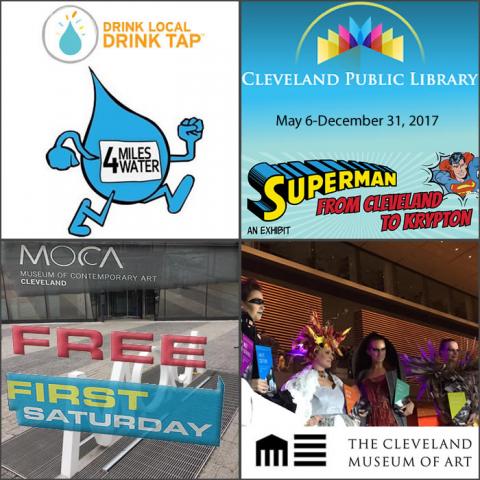 Ever have a day when you have a few things planned, but as the day proceeds, opportunities for more fun activities arise? That was my day on Saturday, May 6, 2017, when a couple of fun things evolved into a full day and evening of activities.

I started my travels for the day in the Cleveland Flats for Drink Local. Drink Tap. Inc.'s 4 Miles 4 Water (@4Miles4Water - #4m4w2017) -- a walk/run to raise financial support for their mission.

On Saturday, May 6th, 2017, 4 Miles 4 Water will take place at a new venue and at a new time! The Greater Cleveland Aquarium and Jacobs Nautica Pavilion waterfront will host this educational and recreational event. Enjoy views of downtown Cleveland and the Cuyahoga River waterfront during the festival, run and walk!

If you don't know about Drink Local. Drink Tap. Inc.'s (@DrinkLocalTap) activism work here in Cleveland, and their sustainable water projects in Africa, I recommend you visit their website, DrinkLocalDrinkTap.org and YouTube Channel, YouTube.com/User/DrinkLocalDrinkTap to learn more.

I had some work I needed to do in the morning, so I arrived late to the "4 Miles 4 Water" event. I am glad I still stopped by to see it, since I was able to see some great drum and dance performances, meet leaders at the information booths, and learn from Executive Director and Founder Erin Huber (@ErinDeeHuber) that the event was very successful!  BIG congratulations to Erin and her leadership team!

Please share the success of the event by retweeting any of these tweets that interest you. Also, I recommend seeing the photos in the May 6, 2017, blog post, Photographs From Drink Local. Drink Tap's 4 Miles 4 Water Run by Share The River (@ShareTheRiver).

It might be chilly outside but our crew is keeping things hott in here! @cleaquarium… https://t.co/FEJdWlfvMK

Do you love Beer, Bloody Marys AND providing safe water to those in need? Then @4Miles4Water is for you! Learn more: https://t.co/gPJxHlOXYH pic.twitter.com/hShXIx4CFY

Here are some of our snaps from the day! Share yours and use the hashtag #4m4w2017! pic.twitter.com/Poelq8XDw2

THIS is who made today possible! We are so grateful! pic.twitter.com/L5GDZi3Jsy

Talk to @A4GL at @4Miles4Water. They are active protecting Great Lakes!

Great last minute decision to support freshwater across the globe. Thx @DrinkLocalTap #4m4w2017 for a refreshing start to the day! pic.twitter.com/rloO3onl9h

Thanks for coming! Some great pics of you on stage and video of Otto dancing! https://t.co/Sj88dN2oU6

We have some super creative volunteers on our #4m4w2017 planning committee and helpful students… https://t.co/8aOHfYtDq6

I knew that the Superman exhibit would be on display through December 31, 2017, but there were some unique things happening on May 6, 2017 (see tweets below). I was also able to meet the man behind the @Cleveland_PL tweets, and learn about some behind-the-scenes facts about the exhibit. I will need to come back again to explore some more, and to show my wife/co-blogger, who could not attend!

Here is a Fox 8 News (@fox8news) video about the event which appears in an article by Suzanne Stratford (@SuzStratford): Superman soars to Cleveland Public Library for special exhibit

Have you heard of Hoopla Digital (@HooplaDigital)? You can check out FREE online Superman and other comic books with your library card from both Cleveland Library Hoopla and Cuyahoga Library Hoopla (@CuyahogaLib).

While at the Cleveland Public Library, I also stopped by to say hello to CJ Lynce (@tuxinboots), who is the manager of the library's must-see TechCentral MakerSpace (@TechCentral_CPL).

The Superman exhibit will be at the library for the rest of the year, so please share infomation about it with others by retweeting the following. Find out more by searching for the #SupermanAtCPL hashtag.

We have the Real Deal Action Comics No. 1 @Cleveland_PL come help us celebrate Two #Glenville kids who changed the world. @BRIANMBENDIS pic.twitter.com/FPQPA3ICvo

So proud of @Cleveland_PL and the best Library Staff around for the year of work to make this #Superman Exhibit happen today. #comevisitcpl pic.twitter.com/t4oppkXrVm

Our Spring Book Sale is on! Today til 6pm, then Mon-Fri 10-6:00 next week. See the #SupermanAtCPL exhibit & check out the kid activities. pic.twitter.com/L5axuYqZMr

Thanks for stopping by, Stuart! https://t.co/hzsXfuhVl0

I'll need to come back to see more of #SupermanAtCLE!https://t.co/uAR18lfKI6 pic.twitter.com/U0cggSx1Up

They're extra nice superheroes too, giving hugs to many pre-schoolers. #SupermanAtCPL https://t.co/slLMc5bc7I

Such a terrific exhibit! Happy to see many people enjoying the opening day. Lots of first-time library visitors too. #SupermanAtCPL https://t.co/hLIYbeOlJh

.@CrookdRiverWmn It was great talking to you and @Cleveland_PL today!

Thanks for letting me know of @FriendsCPL successful opening event.

Thanks @Cleveland_PL. I will need to come back to see more!https://t.co/uAR18lfKI6

Today is the 92nd anniversary of the opening of one of my favorite places in Cleveland- @Cleveland_PL's Main Building on Superior in #dtCLE. pic.twitter.com/af6OxqtbjJ

If you're a fan of #Superman, then @HooplaDigital has you covered. Don't forget to join us at Main Library on May 6! https://t.co/8ZBtbstNDy pic.twitter.com/TnFhYaR5Fq

Thank you to everyone who joined us today to unveil Superman: From Cleveland to Krypton! #SupermanAtCPL pic.twitter.com/LtzJhriMgu

@Cleveland_PL Thank you to the Hero-staff at CPL for a Spectacular celebration of Superman! CPL is a jewel in Cleveland's crown. pic.twitter.com/ucAb6pSICH

This exhibit is amazing and I'm really proud we put it together. You should see it before it leaves at the end of the year. https://t.co/tmuJM3qJ4V

Superman is from Cleveland. https://t.co/sSYRtxSuG3

Thanks to everyone for a terrific event tonight! https://t.co/8RgQzUvY2k

Thank you for venturing out in the rain to celebrate with us! It was great to meet you! https://t.co/FQqdMc8FMT

Come say hi and check out Superman: From Cleveland to Krypton at @Cleveland_PL. #ThisIsCle pic.twitter.com/fxVq3DP0Hz

May 6, 2017, was the first Saturday of the month -- the perfect time to head to Uptown Cleveland (@UptownCle) for the FREE Admission First Saturday at the Museum of Contemporary Art Cleveland (@MOCACleveland).

Yes, each month there is one day with FREE admission, sponsored by PNC Bank (@PNCBank). Thank you, PNC Bank!

Cleveland’s Museum of Contemporary Art (MOCA) plays an urgent and exciting role in the city's cultural landscape. As a non-collecting institution and the region’s only contemporary art museum, MOCA is ever-changing, introducing new exhibitions three times a year and creating fresh experiences for visitors each season. Since its founding in 1968, MOCA has presented the works of more than 2,000 artists to our region, often through artists’ first solo shows.

Find information about current exhibitions on the MOCA website at: MOCAcleveland.org/Exhibitions

Please retweet photos and information that interests you about @MOCACleveland.

On this rainy day- what a great idea! https://t.co/CJnDTFBHKr

.@sandon53 While rain rarely prevents me from getting out, I do agree today is a great day to visit @MOCACleveland https://t.co/DVBHZD84Ar pic.twitter.com/aQn4D5gnZj

Here are two blog posts that I have written about events that took place at MOCA Cleveland. This museum is a great location for special events!

I ended my day with my wife and co-blogger, Julie Smith, joining me as we headed to Cleveland's University Circle (@InTheCircle) to attend a VERY special MIX at CMA at the Cleveland Museum of Art (@ClevelandArt - #MIXatCMA).

Here is a video that shows what MIX at CMA is about:

We attend these monthly MIX at CMA events often, since we enjoy the music, the atmosphere of the Museum's Ames Family Atrium, and especially the tours by the museum's expert curators. (Click here to see the MANY photos we have shared on Twitter of tours during #MIXatCMA.)

The event on May 6, 2017, was not your usual, great MIX at CMA -- it was extra special. This was the second MIX: Model fashion show in partnership with the International Interior Design Association (@IIDA_HQ).

The winners will be decided by a special panel of judges including Cheryl Durst, IIDA executive vice president and CEO; Valerie Mayen, designer and owner of local contemporary clothing company Yellowcake Shop; and Carrie Malatesta, interior designer, IIDA. MIX attendees also have the opportunity to vote for their favorite ensemble online after the fashion show.

Before the show, grab a MIX: Model signature cocktail, or check out CMA’s current exhibitions, Brand-New & Terrific: Alex Katz in the 1950s, and Black in America: Louis Draper and Leonard Freed. Afterward, dance the night away to the sounds of Cleveland-based DJ MisterBradleyP.

Also, you can see Emanuel Wallace's (@MannyWallace) 66 photos from the MIX:Model event on Cleveland Scene's (@ClevelandScene) article/slide-show, All the Fashionable People We Saw At CMA’s MIX: Model 2017

Please see and share my photos, and photos by others, by retweeting my @sos_jr tweets and retweets which follow:

@ClevelandArt will the #MIXatCMA interior design fashion show be featuring the seasons hottest armoires on the catwalk tonight?

I have written many blog posts about the Cleveland Museum of Art and the other museums in Cleveland's University Circle, which you can view by clicking here.

Thanks for a Fun Day!

Thanks to all the organizations that hosted these events -- from the flats to Uptown and beyond!