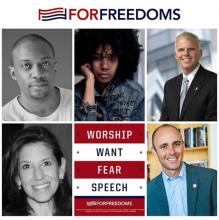 Here are images and a PDF version (opens in new window) of the booklet from the event:

MOCA provided a video of the full Town Hall, so I decided to gather it and other information, and create a blog post. A lot of good discussion occurred at this event, which I think is worth sharing with others.

For Freedoms, the first ever artist-run Super PAC, was formed to encourage art-based forms of political discourse and deeper engagement with the 2016 Presidential election. Founded by artists Hank Willis Thomas and Eric Gottesman, this non-partisan effort declares that art - in all of its forms of expression - is a political act in itself.

Held in the round, this Town Hall discussion will be a collective conversation on political agency and activism, the role of art and artists in American politics, and what freedom means today in the context of the four essential human rights that President Roosevelt cited during his 1941 State of the Union Address: freedom of speech, freedom of worship, freedom from want, and freedom from fear. We hope you will be part of the dialogue.

The following is the For Freedoms: Town Hall Discussion with Hank Willis Thomas official description, plus you can see photos from the event on Facebook here.

Free + open to all

Join For Freedoms co-founder Hank Willis Thomas and a panel of special guests for this Town Hall-style discussion. Reflecting on For Freedoms projects in Cleveland and other American cities, the discussion will center on political agency and activism, specifically exploring the role of art and artists in American politics. The discussion will be moderated by Dan Moulthrop, CEO of The City Club of Cleveland. Arrive early to participate in a “personal freedoms” yard sign-making activity before the discussion.

- About For Freedoms -
For Freedoms is an artist-run super PAC founded by artists Hank Willis Thomas and Eric Gottesman. The project encourages art-based forms of political discourse to advocate for deeper public engagement surrounding the 2016 presidential election. Together with a group of some 50 artists, For Freedoms draws inspiration from Franklin Delano Roosevelt's articulation of the freedoms that underscore civil society: freedom of speech, freedom to worship, freedom from fear, and freedom from want. For Freedoms projects have included performances, exhibitions, meetings, programs, visual art-as-ad campaigns, and various forms of inclusive activism. Projects have occurred in Chicago, San Francisco, New York, Houston, New Orleans, Kansas City, Boston, and now Cleveland. More at forfreedoms.org.

- About Hank Willis Thomas -
Hank Willis Thomas is a photo conceptual artist working primarily with themes related to identity, history and popular culture. He received a BFA in Photography and Africana studies from New York University and his MFA/MA in Photography and Visual Criticism from the California College of Arts. He has exhibited throughout the U.S. and abroad including, the International Center of Photography, Studio Museum in Harlem, Baltimore Museum of Art, the Cleveland Museum of Art, among others. Thomas’ work is in numerous public collections including The Museum of Modern Art New York, The Solomon R. Guggenheim Museum, The Whitney Museum of American Art, The Brooklyn Museum, The High Museum of Art and the National Gallery of Art in Washington DC. His collaborative projects have been featured at the Sundance Film Festival and installed permanently at the Oakland International Airport, The Birmingham-Shuttlesworth International Airport, The Oakland Museum of California, and the University of California, San Francisco. He is also and a recipient of the New Media grant from Tribeca Film Institute and New Media Infinity Award from the International Center of Photography for his transmedia project, Question Bridge: Black Males. Recent notable exhibitions include Hank Willis Thomas at the Cleveland Museum of Art and Repetition and Difference at the Jewish Museum in New York. He sits in the Public Design Commission for the city of New York. Thomas is represented by Jack Shainman Gallery in New York City and Goodman Gallery in South Africa. More at www.hankwillisthomas.com.

38 tweets/retweets about this event:

Tomorrow is the first Saturday of the month and that means FREE ADMISSION to @MOCACleveland!!

We wholeheartedly encourage you to attend the For Freedoms: Town Hall Discussion with Hank Willis Thomas... https://t.co/rygiujc5Lz

And we are off. And it's about to get busy. #forfreedoms pic.twitter.com/Al2Gp1WcVv

Audience member: wants "Freedom from anger." "We need to let go of anger, diffuse it, and then have a conversation."

@@danmoulthrop doing an "emotional check-in with the audience"; people are "nervous until next Tuesday." #ELEVATEtheDebate #ARTtheVOTE

#ForFreedoms comes from this Four Freedoms Roosevelt State of the Union 1941 https://t.co/0jMfMV3vo9

We really need the freedom to question... #forfreedoms

I want freedom from the media. I want access to the truth and not their agenda #forfreedoms @MOCACleveland

I posted 4 photos on Facebook in the album "For Freedoms Town Hall Meeting" https://t.co/wFcpbpOztu

If you missed the #ForFreedoms panel at @MOCACleveland you can watch the full video of the event here: https://t.co/nc8zu6YSBq#ThisIsCLE pic.twitter.com/cmW8BG6KpC

You can learn more about the Town Hall in these articles:

Learn more about For Freedoms (@forfreedomspac) on their website: ForFreedoms.org

As the first artist-run super PAC, For Freedoms uses art to inspire deeper political engagement for citizens who want to have a greater impact on the American political landscape.

We believe that artists, and art, play an important role in galvanizing our society to do better. We are frustrated with a system in which money, divisiveness, and a general lack of truth-telling have stifled complex conversation. We created the first artist-run super Pac because we believe it's time for artists to become more involved in the political process.

Founded by Hank Willis Thomas and Eric Gottesman, For Freedoms encourages new forms of critical discourse surrounding the upcoming 2016 presidential election. Our medium for this project is American democracy, and our mission is to support the effort to reshape it into a more transparent and representative form.

Inspired by American artist Norman Rockwell’s paintings of Franklin D. Roosevelt’s Four Freedoms from 1941, our super PAC aims to subvert a “Rockwellian” nostalgia for a “simpler” America while co-opting a visual language that is accessible to a wide audience of viewers. Franklin D. Roosevelt’s Four Freedoms are freedom of speech, freedom of worship, freedom from want, and freedom from fear.