Think & Drink with the Extinct: Biomimicry! 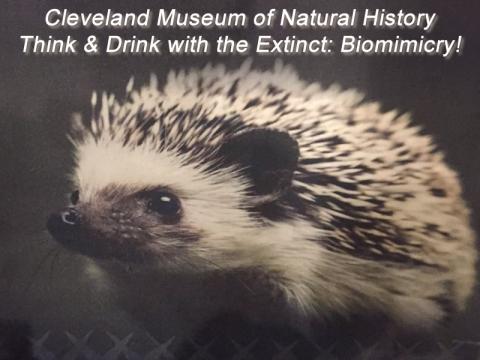 This is the third blog post we have written about a Cleveland Museum of Natural History (@goCMNH) Think & Drink with the Extinct event. Each event has been a unique experience. 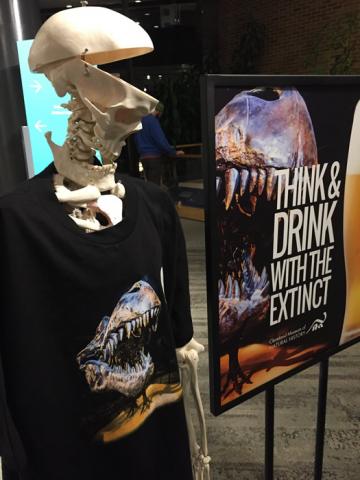 Raise a glass and increase your knowledge of the natural world at one of the brainiest happy hours in Cleveland!

When Stuart wrote the blog post, Think & Drink with the Extinct: Paleontology - Fossils and Ferments, we thought it would be good to write about the first of these events that he attended on October 21, 2015. A first-time unique experience -- interacting with the scientists at a Cleveland Museum of Natural History gathering.

We attended and wrote about the Think & Drink with the Extinct: Wildlife! on October 19, 2016. It was the our first visit to the Cleveland Museum of Natural History since they opened their new Ralph Perkins II Wildlife Center & Woods Garden — Presented by KeyBank (@KeyBank). Yet another unique experience -- exploring the NEW wildlife center.

On December 7, 2016, Julie won a one-year CMNH membership when we attended a Cleveland Museum of Natural History's Reel Science movie and lecture at the Capitol Theatre (@CapitolW65th). We were excited, since we already enjoyed the museum, and knew we would now be more likely to learn about more events as members.

We did not know that the very first Think & Drink with the Extinct that we would attend, with our brand-new membership, on January 18, 2017, would feature the University of Akron (@uakron) Biomimicry Fellowship Ph.D. candidates we had already written about in our blog twice! We were excited to learn of their new product based on biomimicry principles (see the Hedgemon, LLC, section below), and meeting some of the other students. It is great that the museum gives the opportunity for many people to learn about the unique ideas being developed at Akron University's Biomimicry Fellowships!

Our 43 @sos_jr tweets and retweets share our photos and videos from the Think & Drink with the Extinct - Biomimicry event, and tell the story of what we learned at the event. What they can't tell you are some of the interesting details that we have learned by talking to science experts at these events. For that, you will need to attend a future Think & Drink with the Extinct event yourself (I have listed the upcoming dates & topics below).

Explore Biomimicry at the Cleveland Museum of Natural History's Think & Drink with the Extinct https://t.co/y0jnSgc0ME @gocmnh

I look forward to hearing about your research at @goCMNH tonight pic.twitter.com/aLqUex6RcB

Made it to Wikipedia, but stay tuned, more to come!! pic.twitter.com/jn8XUzZo5b

the first time that I was interviewed to give an independent commentary about others' research.https://t.co/vZwjuJaoRY

T-Rex photo bomb @goCMNH. He oversees all the best #Events.
Stop by tonight and see for yourself! #ThinkandDrink#MuseumSelfieDay2017 pic.twitter.com/wGa9rNu99p

HUGE THANK YOU to tonight's #ThinkandDrink sponsor @GLBC_Cleveland! What could be better than #biomimicry and #beer? Cheers! pic.twitter.com/QRiGshd2p9

Every time I see the Florida Everglades display at @goCMNH, I think of @floridatrail backpacking stories from the @ALDHAeast Gathering. pic.twitter.com/7WK8UgkWA4

Ouch.
Someone lost their smartphone in the parking garage and screen slightly cracked.

It still works so I turned it in to @goCMNH staff. pic.twitter.com/UBVW0S42B6

.@bkhsiung Thx for talking more at end of @goCMNH event.

Congrats Emily & U for exciting news that #Hedgemon will be featured on @Discovery pic.twitter.com/Imb7Thqg34

Thanks for the post about our biomimicry superstars! https://t.co/MUWakYYPXl

.@bkhsiung I enjoyed the report!!

My wife just got home & told me she saw U on @WEWS earlier. Very nice report about your exciting work!

Hedgehog could be key to safer football helmets, according to Univeristy of Akron graduate students | @bobjonesTV https://t.co/ioeOBv84Yj

Since we had met the developers of the new Hedgemon product previously, we wanted to add a little more about their creative ideas to this blog post.

When we first met Biomimicry Fellowship Ph.D. candidates Emily Kennedy and Bill Hsiung (@bkhsiung), it was on August 11, 2015, at a smaller event at DXY (@dxydoes) -- a DXY Tangent event entitled: The Things We Mimic... It was the first time we had heard of the field of biomimicry. We were so impressed that we wrote a blog post on what we learned called: DXY Tangent: Biomimicry!

Biomimetics or biomimicry is the imitation of the models, systems, and elements of nature for the purpose of solving complex human problems.

We were interested to see at the Think & Drink with the Extinct on January 18, 2017, that they are working on an entirely new project which is the foundation of their new company, Hedgemon, LLC. Based on research on the abilty of hedgehogs' quills to protect hedgehogs from falls, Emily Kennedy and Bill Hsiung are developing and testing prototype polymer spines. Their initial research will be testing the spines in football helments to find a way to protect football players from concussions. 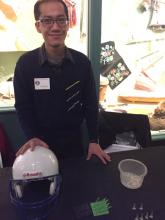 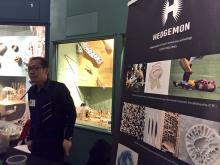 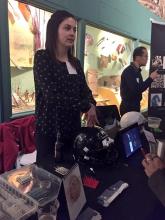 We also recommend you read the following article and view the related video. It gives an excellent overview of Hedgemon's product:

We also found these articles that will provide additional information:

You can find updated lists of future topics on the Think & Drink with the Extinct web page at: CMNH.org/ThinkDrink

Here is the current schedule for spring 2017:

We look forward to attending more Think & Drink with the Extinct and other events at the Cleveland Museum of Natural History (@goCMNH) with our new membership. There are always interesting things happening in University Circle (@InTheCircle)!