Think & Drink with the Extinct: Paleontology - Fossils and Ferments 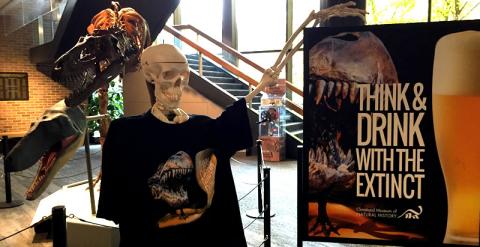 During the 2014/2015 program year for Cleveland Museum of Natural History, I remembered hearing about Think & Drink with the Extinct events. Since I have attended astronomy programs and other public events at the museum, I was intrigued, and started promoting the events in my @sos_jr tweets. Promoting events/meetings is the reason I starting using Twitter.

I did not think that it would take until Fall 2015 to finally have a night that I could attend. I decided to share my photos and tweets from the evening to thank the organizers of the event, and to encourage others to attend. I will not attempt to fully express what the event is like -- it is something you need to experience for yourself -- but I will say that if you like having access to extremely bright people from whom you can learn, then you should attend.

On October 21, 2015, the Cleveland Museum of Natural History (@goCMNH) had their monthly Think & Drink with the Extinct (#ThinkandDrink). The evening's theme was "Paleontology - Fossils and Ferments." October 21, 2015, just happened to be Back to the Future Day -- somehow it seemed right to be in a museum to celebrate.

Here is a slideshow of my photos from the evening:

Think & Drink with the Extinct 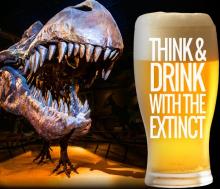 Here is the official description of the event:

THINK & DRINK WITH THE EXTINCT

Raise a glass and increase your knowledge of the natural world at one of the brainiest happy hours in Cleveland!

Third Wednesday #ThinkandDrink is back for another season! Each month highlights a different field of research or Museum area, and offers exclusive access to professional staff and researchers, paired with unique experiences and interactive demonstrations. Cash beer/wine bar. Complimentary light snacks. Food available for purchase.

Here are my @sos_jr tweets and retweets sharing my experience at Think & Drink with the Extinct: Paleontology - Fossils and Ferments. Please share any photos and videos that you find interesting by retweeting.

#ThinkandDrink is well under way! Grab a beer & dig all things #paleontology until 9pm! https://t.co/axYxUOujku pic.twitter.com/07JB6K8Juy

Staff from @goCMNH asked at #ThinkandDrink what this skull is from. I was only person to guess correctly! pic.twitter.com/KSp2hEYOBv

@sos_jr @goCMNH I love this museum, I love how it smells when you walk in every single time - it smells like science

I met a representative of @AlliedIM at the @goCMNH event last night. Following up with a thank you email for the info she shared with me.

Think & Drink with the Extinct Dates and "Reel Science"

I hope to be able to attend future Think & Drink with the Extinct events. See you there!

Also, here is a Reel Science flyer I picked up about the museum's film series in partnership with Cleveland Cinemas (@ClevelandCinema):

WHAT IS THE KIRTLANDIA SOCIETY?

In 1976 a group of members of the Cleveland Museum of Natural History started the Kirtlandia Society naming it in honor of Dr. Jared Potter Kirtland, one of the founding fathers of the Museum. The Kirtlandia Society performs the role of a public service organization for the Museum by supporting a number of it's scientific research and educational programs.