The tech and design volunteers at Cleveland GiveCamp (@CleGiveCamp) 2015 really "wowed" the nonprofit partners served this year with some incredible projects. The many tweets I embedded in this blog really give a flavor of the weekend. I recommend scanning through them and reading those that pique your interest.

I have been fortunate to be able to attend all six Cleveland GiveCamp weekends! Cleveland GiveCamp is believed to be the largest in the United States. Read on to learn how so many volunteers come together to make a huge difference in our community.

This is my fifth year of having the honor of serving on the Cleveland GiveCamp Steering Committee. Of all the organizations that I have been associated with, I need to say the Cleveland GiveCamp Steering Committee is the most unique in how the team works together so incredibly seamlessly. The individuals on the team recruit sponsors, volunteers, and nonprofit partners, and organize meals and facilities for the weekend. We don't have a chair that leads us -- we just meet regularly to organize our tasks on Trello.com, so that we reach our annual goals! Financial sponsors are key to Cleveland GiveCamp's success in feeding and caring for so many talented volunteers for the weekend. They donated a record amount in 2015, and assisted in promoting the event to the tech community. I am pleased that I have had friends approach me this year about how their tech companies can get involved. 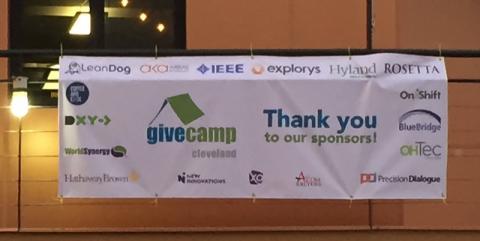 Thank you to Cleveland GiveCamp 2015 sponsors: If you guys have an opportunity, and you have the skils, please help somebody else. Because GiveCamp really made a huge difference in our world!

On May 28, 2015, I was fortunate to hear Katrina Blatt (@KatrinaBlatt) from Malachi House (@MalachiHouse) present at the 2015 CDPUG (Cleveland Digital Publishing Users Group - @CDPUG) 11th Annual CDPUG Showcase. She shared the important mission of Malachi House, plus discussed how Cleveland GiveCamp made it possible to have a website to convey this mission to the greater community.

Please invite nonprofit leaders to view this video to learn how Cleveland GiveCamp could possibility assist them!

Here are some of my tweets and retweets from before the Cleveland GiveCamp weekend. They will give you an idea of the promotion and online activity that occurred before the event even started.

My sons, Kevin and Mike, always come with me early Friday afternoon to help set up.

What a difference it makes this being the sixth year - Cleveland GiveCamp is such a "well-oiled machine" of productive volunteers! When we got there, everything from the set-up of chairs and tables, to the establishment of a temporary kitchen was already done. We had nothing to do!

Please click on this photo to view my Day One photos. There is also a full screen button to open a large slideshow.

There was a record number of tech and design volunteers this year. Therefore, I served on the Social Media Team with my son, Kevin, instead of on a team building websites for nonprofits. Mike served on the TrueNorth Cultural Arts Team. There were also a lot more tents this year than in the past. Volunteers really want to live the Cleveland GiveCamp experience for every minute of the weekend.

Learn more about the day by viewing my tweets/retweets, which include great photos that were shared. Please retweet what you find interesting.

Mike was the main man of the Smiths attending! I am so proud of my son for working from 8:30 am to past 12:00 midnight on the TrueNorth Cultural Arts Team. Every time I looked in on his team, he was busy working with his head down doing coding.

The WordPress theme that his team built used a type of markup that I will need to have Mike teach me, since it was not something I have used before. I really like the design that the TrueNorth Cultural Arts Team created for the new website. I heard in the closing presentations about the new functionality it offers in allowing artists to register online. I do have to say that when it got dark outside, the team that Mike was on had the coolest office at Cleveland GiveCamp, if not all of Cleveland. They were on the top deck of the LeanDog Software (@LeanDog)/Arras Keathley Agency (@AKACleveland) boat. To be on Lake Erie with view of the Rock and Roll Hall of Fame and Museum (@Rock_Hall) is an incredible workspace.

As I have mentioned in past years' blogs (see links below), one of the things that I like about Cleveland GiveCamp is its location that supports creativity. In addition to the boat, I like seeing all the airplanes at Burke Lakefront Airport (@BurkeLakefront). Plus, as an added benefit of being at this Cleveland airport, visitors can view all the International Women's Air & Space Museum (@WomenInTheAir) exhibits for free.

Please click on this photo to view all my Day Two photos and videos. There is also a full screen button to open a large slideshow.

Note in the tweets the resources from the following two new Cleveland GiveCamp training sessions that were added in 2015:

You really had to be there to understand the strong feelings experienced at the closing ceremony. Attendees are tired from a weekend of hard work, and at the same time very energized by the experience!

To get a sense of the closing, I invite you to see the videos posted on GreatLakesGeek.Com (@GreatLakesGeek) by Dan Hanson (@DanHanson) at: Cleveland GiveCamp 2015 19 Non-Profits Helped July 17-19, 2015

Please click on this photo to view my Day Three photos. There is also a full screen button to open a large slideshow.

In addition to tweets about the great success of the weekend, you might also find useful the resources shared by Heidi Cool (@hacool) in her WordPress training. We are fortunate to have had Heidi Cool share her knowledge to the nonprofit leaders over the weekend, plus she has spoken publicly at my WebSigCleveland.org meetings and elsewhere.

Since Cleveland is welcoming the 41st Republican National Convention (@2016CLE - #2016cle) on July 18-21 2016, Cleveland GiveCamp will not be on its normal third Saturday in July next year. Watch for announcements with further details.

Read more about experiences at Cleveland GiveCamp in the following blog posts/articles, and share links to the blogs with others:

There has been a lot of Twitter activity since the weekend. Here is some I captured for this blog post: