Two years ago, I first learned about the FRONT International Cleveland Triennial for Contemporary Art (@FrontTriennial - #FRONTart2018) from Steven Litt's (@Steven_Litt) August 4, 2016, article FRONT, a citywide art exhibit with global reach, will debut in Cleveland in 2018 (photos). I was immediately excited! It is interesting to look back at the article now, and see how the vision from a year ago has evolved into today's spectacular reality. 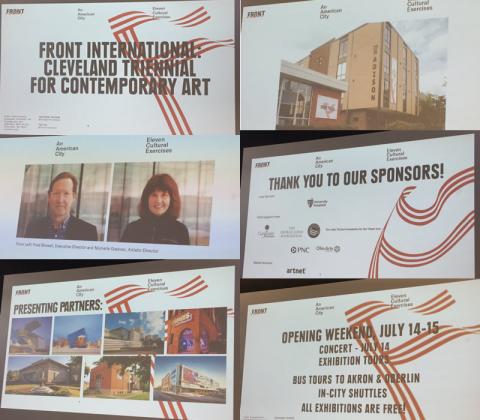 When I first learned about Front International Cleveland Triennial for Contemporary Art (@FrontTriennial - #FRONTart2018 ) in the summer of 2016, I was very excited about this grand art show taking place over many northeast Ohio locations in the summer of 2018. What I did not know was that it was even bigger than just the summer exhibitions. I have already enjoyed attending several Front International artist talks, and look forward to more of these pre-summer events.

I have always planned to write about the summer Front International art installations, but now feel it is also important to feature these discussions that are leading up to the main event. The tweets below do not do full justice to the excitement of what I am learning at these Front International events -- you must attend yourself!

Here are many of my @sos_jr tweets and retweets that I shared before the opening. They give an overview of just some of the many activities that took place before the summer of 2018, and many link to articles with even more information. I had planned to include a section in the blog post about the many articles written leading up to the FRONT International opening, but the list was too long for this post!

Please share any tweets that contain interesting photos or links to informative articles by retweeting them. Note that clicking on Twitter photos will enlarge them!

Thrilled to share that @CANJournal is planning a local triennial alongside FRONT International next summer! https://t.co/IVlGiSoNjj

Steven Litt on CAN triennial: https://t.co/hwuySDN12y

Thrilled to share that @CANJournal is planning a local triennial alongside FRONT International next summer! https://t.co/IVlGiSoNjj

Live in Glenville? Passionate about art & community?
RT if you know someone who fits the bill & see you at the FRONT Porch Monday 9-noon pic.twitter.com/Z8dsQ5XY2q

Celebrating #WorldArchitectureDay with The Madison Residencies! Here's an archival shot of the building's construction pic.twitter.com/qoWEyc4Xt4

It's a beautiful day in Glenville! Discover our new FRONT Porch, we're here until noon. #FRONTart2018

Today #FRONTart2018 is EIGHT MONTHS AWAY!
RT if, like us, you're counting the days. pic.twitter.com/JNIXJ2rROY

The first edition of @fronttriennial opens in 5 months! We’re thrilled to be a partner of the triennial curated by Michelle Grabner, bringing a city-wide exhibition comprised of artist commissions, performances, films, and public programs to Cleveland. #FRONTart2018 pic.twitter.com/NN4jsTleTS

For #ValentinesDay, fall in love with @fronttriennial, now 5 months away. Opening July 14th, the first edition of the triennial will feature #LinKe at #MOCACleveland. #FRONTart2018 pic.twitter.com/08p6YMecZM

Save the date! The Opening Gala for #FRONTart2018 will be Friday, July 13, 2018. #MondayMotivation https://t.co/QnfzVGg5KM pic.twitter.com/zz5DN7PfM4

FRONT was deliberately designed so it could be experienced by walking and taking public transit. So on July 14th, grab your map and go! #FRONTart2018 pic.twitter.com/4dPxCR4uBu

We're on Summer break! Our galleries are temporarily closed until July 14 while we get ready for @FrontTriennial. Celebrate the opening of #FRONTart2018 with us from 11am-10pm on Saturday, July 14 with a free party, artist talk and performance. pic.twitter.com/K5j20AFbXM

Are you ready? @FrontTriennial is only 1 month away! We're celebrating the countdown by partnering with our friends at @AkronArtMuseum for #Cleveland's first ever #MuseumInstaSwap. Follow us on Instagram to see what's in store for today's swap. #FRONTart2018 pic.twitter.com/OzXZDhsp3L

Are you ready? #FRONTart2018 opens exactly one month from today! See what to expect via @WhyCLE: https://t.co/iQxlL9bCof

We're less than a month away from #FRONTart2018. Opening Day at #AkronArtMuseum is Free & Open to everyone. 1 of 15 artists you'll see work by is #BrennaMurphy who creates intricate worlds that resemble ancient civilizations & utopian futuristic spaces. https://t.co/XrdkQoPJp3 pic.twitter.com/eegPXvQcNK

A.K. Burns's sculpture just arrived in Cleveland and we're busy installing it in front (ha!) of @TransformerStat for #FRONTart2018. Check it out! pic.twitter.com/ykPzwr0UBp

On June 24, Vital Neighborhoods invites you to share your perspective on how to build community pride & generate opportunities for ongoing community engagement for each of #Cleveland's neighborhoods. Register now for #CommonGroundCLE: https://t.co/DqrcGfm229. #CG2018 pic.twitter.com/ZY5ljP5c5F

We couldn’t resist the “up close” view! It was fun to watch all the passersby stop to stare in amazement! pic.twitter.com/ihcsqnbNEV

Borders, fences, and walls. Who do they protect? What do they protect? A.K. Burns’ sculptures are now installed in front (ha!) of @TransformerStat. #ThursdayThoughts pic.twitter.com/WIkaa55i5n

This sculpture by Tony Tasset will double as a public shelter and gathering spot this summer.

The Opening Day of #FRONTart2018 is coming: 7/14/18. At #AkronArtMuseum, the opening day is FREE for Everyone. That's right, a FREE Saturday https://t.co/XrdkQoPJp3 You're gonna want to see the Akron exhibition, trust me. #contemporaryart #awesomestuff pic.twitter.com/mHb0UhHip6

Installation is under way in spite of the weather! Have you seen this? We're installing "Judy's Hand Pavilion" next to @MOCACleveland pic.twitter.com/MVavNxdR3N

@tkunsman, I will attend Preview Saturday and have member tickets for August.

FYI, I like to go to @MOCACleveland when @PNCBank sponsors 1st FREE Saturdays (but not this month) https://t.co/V9OsL2yA2B

This month is extra special since @FrontTriennial has special FREE event. pic.twitter.com/0up2LHYsJP

@tkunsman, I recommend you learn more about @MOCACleveland events as part of @FrontTriennial in addition to seeing @ClevelandArt’s Infinity Mirrors.

The #FRONTart2018 catalog will be available at MOCA Cleveland, the Cleveland Museum of Art, Akron Art Museum, Transformer Station, SPACES Gallery and on-line at https://t.co/STKrPoqQGd https://t.co/rNRhcfbjeg

Definitely getting my endorphin boost this week. https://t.co/8MdIMCISoX

Thanks to @CharLaFowler, @SherwinWilliams and The John P. Murphy Foundation, we're proud to announce FRONT Canvas City, a new app that enables users to virtually view murals —a part of #FRONTart2018—at their locations around downtown Cleveland. https://t.co/gVeluWaIMo 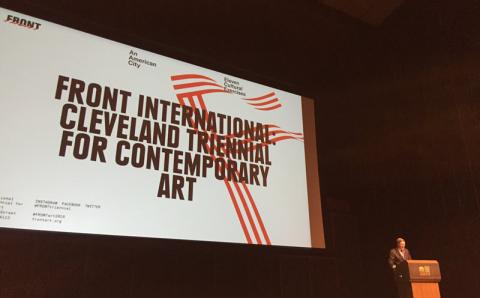 The BIG day is finally here!

Since I had received press accreditation back in January 2018, I received a password for the FRONT VIP Portal, and the following details from the SUTTON (@Sutton) PR firm: 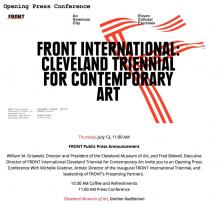 ... our opening day press conference on Thursday July 12th, 2018 at 10:30 am. William M. Griswold, Director and President of the Cleveland Museum of Art, will join both Fred Bidwell, Executive Director of FRONT, and Michelle Grabner, Artist Director of the inaugural edition, to provide remarks, alongside the leadership of FRONT’S presenting partners. The event will take place at The Cleveland Museum of Art in the Gartner Auditorium at 1150 East Blvd, Cleveland OH 44106.

While in line getting my VIP access wrist band and a FRONT International bag full of literature about the event, I started a conversation with two women who came to Cleveland all the way from Los Angeles, California. I learned that they were donors to the project, and I enjoyed sharing with them the excitement of the day! We were soon joined by FRONT International founder, Fred Bidwell (@FredBidwell), which gave me the opportunity to congratulate him in person on the excitement generated by FRONT International. After he left to talk to more attendees, we were joined briefly by the Cleveland Museum of Art (@ClevelandArt) director and president, William M. Griswold.

Next, I went to the Museum's private dining room for a pre-press conference reception catered by Provenance (@ProvenanceAtCMA). As I was enjoying my orange juice, I was approached by someone who asked to share my table. I was excited to learn that he was the Akron Art Museum (@AkronArtMuseum) Director and CEO, Mark Masuoka (@MarkMasuoka). He told me how the Akron Art Museum now has Downtown@Dusk outdoor concerts. I let him know that I had written a blog post about the Akron Art Prize 2016, that took place at the Akron Art Museum, and how on vacation I was reminded of the Akron Art Museum's Inside|Out community-activated art project (see my Michigan Journey blog post) supported by the Knight Foundation (@knightfdn).

I enjoyed talking to several people at the reception -- it was great to see so many people here from all over the country. For example, Julie Schenkelberg is an artist from Detroit, Michigan, and gave me her business card. She joined Mark Masuoka and me at our table. As I was preparing this blog post, I saw Artist Talk: Julie Schenkelberg listed as a past event at the Akron Art Museum.

Here is a WKYC-TV (@WKYC) video of Fred Bidwell's remarks, followed by Tweets from the opening day press Conference.

I’m so glad to be here! I am meeting the most interesting people. #FRONTart2018 pic.twitter.com/snnP0DgpWm

A BIG thank you to all the many partners and sponsors. pic.twitter.com/3cHmYQJx4u

Thrilled to welcome international media to the the preview of #FRONTart2018! Thanks to everyone who joined us and thanks @ClevelandArt for hosting us ‼️ pic.twitter.com/GHB7HeGwEz

Michelle Grabner, Artist Director of @FrontTriennial’s #FRONTart2018 shares all that is happening in #Cleveland and #Akron.

So many great institutions had to come together to bring #FRONTart2018 to #Cleveland. We’re proud to be partner pic.twitter.com/Wk49llYkTe

So much is happening with this international #art event in #Cleveland!!

Be sure to follow @FrontTriennial and the #FRONTart2018 hashtag for announcements.

On the July 12, 2018, I was able to visit three of the venues about which I am currently writing a separate blog post. I hope to attend many of the other venues, and to share my visits in my @sos_jr tweets and retweets and additional blog posts. Watch for announcements on Twitter and visit sosAssociates.com/Blog to see my journey.

Disclosure: I received a VIP pass from FRONT International Cleveland Triennial for Contemporary Art to attend their Opening Day Press Conference on July 12, 2018, and the reception at the Cleveland Museum of Art (@ClevelandArt) that preceded it. The VIP pass also allowed me to attend events at other venues during the day, and enjoy the accompanying receptions at no charge. I also received a password for the FRONT VIP Portal, which gives me access to other special invitations and media information. I was given the VIP pass and a press pass to attend because of my support of FRONT International Cleveland Triennial for Contemporary Art via my @sos_jr Twitter feed and blog posts. I enjoyed the Opening Day Press Conference and related events that day, and wrote this blog post to share my experience and my opinions.