WebSigCleveland.org - So You Think You Know Podcasting 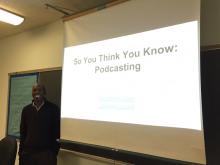 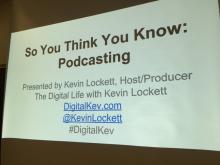 I was fortunate to have Kevin Lockett present a talk entitled So You Think You Know Podcasting at my October 17, 2015, WebSigCleveland.org meeting. Kevin's podcasting talk also provided resources and creative ideas beyond podcasting, which is why I decided to gather my notes, tweets, and Kevin's slides, and create this blog post.

Be sure to learn more about Kevin at his cleverly named website, DigitalKev.com, and on Twitter at @KevinLockett.

Thank you to Kevin for providing his So You Think You Know Podcasting slides on slideshare. I have also embedded them here for your review:

So You Think You Know Podcasting from Code Akron

You can download a PDF version of Kevin Lockett's So You Think You Know Podcasting slides here.

My notes on the presentation are included in my @sos_jr tweets I did during the meeting, so I have embedded them here.

Invite for 10/17 "So You Think You Know #Podcasting" with @KevinLockett sent to http://t.co/XvgJ7lHhJu members: https://t.co/4Jl5MnzxMK

Recommendation by @KevinLockett: Make your #podcast on a niche within a niche. Be focused at your start. http://t.co/My6OR8xgNv #WebSigCLE

A lot of is similarity with #blogging & #podcasting on determining a subject niche. Via @KevinLockett at http://t.co/XvgJ7lpGRW #WebSigCLE

How long should your #podcast be? Think: "How long would you listen to you?" Know your audience! via @KevinLockett #WebSigCLE

#SocialMedia is a great way to contact people to interview. @KevinLockett uses #Twitter to reach out to people for a #podcast. #WebSigCLE

Listening is the most important in #podcasting. Hear what the person you are interviewing is saying. Via @KevinLockett. #WebSigCLE

FreeConferencePro free conference call service - U can do #podcast interview by phone. https://t.co/BuTX62UHj9 via @KevinLockett #WebSigCLE

Morning, excellent talk at http://t.co/XvgJ7lpGRW! Now an afternoon party & tonight a Shakespeare play! ðŸŽ­ I'm having just too much fun!

.@KevinLockett I had an http://t.co/XvgJ7lpGRW attendee say my #WebSigCLE mtg is great service to community. Thx for your excellent talk.

@sos_jr Fantastic! It is a great service and hopefully more people will spread the word.

Kevin did a great job reviewing what to consider when starting a podcast. His thought process brings focus to his work, and is transferable to other creative endeavors like blogging and web content creation.

If you get a chance to hear his presentation in person, I recommend it. As a follow-up to his talk, I have provided the following useful resource links for some of Kevin's slides. Putting this blog post together helped me organize what I learned from Kevin in a form that I can reference again in the future. I hope it is useful to those reading my blog post.

Upload This! - Resources for uploading podcasts:

Here is the official description of the talk from the WebSigCleveland.org meeting website:

So You Think You Know Podcasting

During this session, Kevin Lockett (@KevinLockett) will discuss how he created his Digital Life with Kevin Lockett podcast and how creating a podcast is not as hard or easy as it seems.

Included in the workshop, you will learn:

Kevin Lockett is a Social Media Strategist based in Akron, Ohio, where he also host and produces "The Digital Life with Kevin Locket” podcast.

Kevin’s career kicked off in 2008 after seeing a presentation about social media at E.J. Thomas Hall.

“I used to have all these ideas in my head, but I didn’t have the tech savvy skills to flesh them out or live in a big city like New York where my content could be published; but after seeing social media pioneer, David Meerman Scott’s lecture, I learned that there were platforms that would allow me to take my media and marketing thoughts and turn them into reality.”

In 2015, Kevin created “Code Akron" (CodeAkron.com), where he introduces urban youth to technology through coding and business.  Also this year, Kevin wrote and published first eBook, So You Think You Know Content Marketing which recently hit #3 on Amazon's Best Sellers in Computers & Technology Short Reads list

A pop culture junkie at heart, it is not unusual for Kevin to watch The Walking Dead, Charlie Rose or General Hospital, while researching his next podcast interview or tweeting frantically during the Emmys, The Oscars, MTV Awards as well as The Tonys, while keeping an eye on the Cavs in the finals.  #GoCAVS

Please use the #WebSigCLE hashtag if you want to share information about WebSigCleveland.org meetings on Twitter, and visit the website to learn about upcoming meetings. I have meetings scheduled for the rest of 2015, and soon will start planning for 2016. Watch for details on:

Here are my past blog posts with the WebSigCleveland.org topic tag: