This is the seventh blog post I have written about a Cleveland.com TweetUp, and my wife, Julie, and I have attended many more. They are always about having fun in Cleveland while making new friends and meeting old TweetUp friends. I saw some people I had not seen in a while, so it was great to reconnect. 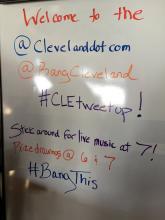 Like the February 5, 2015, Corner Alley - Uptown TweetUp (@UptwnCrnerAlley UPDATE 11/22/15 NEW TWITTER NAME: @CornerAlleyUC), the September 24, 2015, Cleveland TweetUp at the The Big Bang Cleveland (@BangCleveland) was about welcoming a new entertainment venue to Cleveland. It was again hosted by Kristel Hartshorn (@Kristel_CLE) and Troy Smith (@TroyLSmith). I suggest you follow them on Twitter, and read their Cleveland.com (@ClevelandDotCom) articles, since they write about Cleveland entertainment. 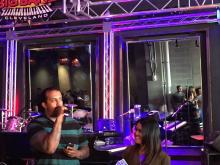 Here is the event announcement:

Join us for a TweetUp at the new Big Bang Dueling Piano Bar!

Cleveland.com and The Big Bang are teaming up to bring you an evening of food, giveaways and music on Thursday, September 24. This is your chance to check out Cleveland’s only dueling piano bar, located at the newly redeveloped East Bank of the Flats.

Spend happy hour with our entertainment reporters, Kristel Hartshorn and Troy Smith, followed by all request music performed by some of the best entertainers around. Enjoy complimentary appetizers, drink specials, and the chance to win some great prizes from The Big Bang and the Greater Cleveland Aquarium. This event is free to attend, but you must register in advance to get on the guest list and enter the prize drawing.

Don’t forget to tweet about the event before, during and after with the hashtag: #CLEtweetup

I have gone to a dueling pianos-style bar in another city, so I was excited to now have this type of entertainment in Cleveland. The following photos and videos from the event will give you a flavor of the evening. Also, see the tweets below for more content about the evening. Julie was not able to attend this Cleveland TweetUp, so I look forward to going with her to The Big Bang Cleveland in the future.

Within this photo slide show, I did include five short videos. Be sure to watch the videos! They will give you a taste of this musical venue, but you really need to go and experience The Big Bang Cleveland in person.

Note that, in addition to The Big Bang Cleveland photos/videos, I have also included photos of other new venues on the East Bank of the Flats. I enjoyed seeing the nightlife of Crop Sticks/Crop Rocks (@CropBistro) and Punch Bowl Cleveland (@PunchBowlCLE) after the TweetUp.

As I was preparing this blog post, I saw Kristel Hartshorn's article: Tour inside 'The Big Bang' hitting Flats East Bank with Friday opening (video). This pre-opening video presents information about all the musical fun that is now in Cleveland at The Big Bang Cleveland.

Here are my @sos_jr tweets and retweets about the Cleveland.com Cleveland TweetUp at The Big Bang Cleveland. Please share the photos/videos and information by retweeting those that interest you.

Our next #CLEtweetup is at @bangcleveland on Sept 24th. Claim your free spot on the guest list: http://t.co/5juTID7KEv

@sos_jr @NEO_Cycle thanks! Glad u enjoyed it. Did u get a chance to make it out? Looking forward to seeing u at @bangcleveland Sept. 24!

#NEOCycle is over but the great rides continue. Join Slow Roll tonight in Ohio City & beyond: Meet @ Market Square Park to ride @ 7 PM.

RT clevelanddotcom "Register for the #CLEtweetup at bangcleveland now for a chance to win prizes at the event: http://t.co/WawaJUWKJb" #CLE

At @bangcleveland for #CLEtweetup. Over heard two people already say how they don't have Twitter. So I guess they're here for the #cleUp?

Our #CLEtweetup at @bangcleveland starts now! Join us for drink specials, free appetizers, and fun music!

Thanks to @bangcleveland for a great #cletweetup, and thanks to everyone who joined in the fun! Now it's time for music! #bangthis

.@Kristel_CLE Gr8 catching up with U at @BangCleveland. I look forward to your article/video on @ClevelandDotCom about fun at #CLEtweetup!

Happy to have won a @bangcleveland gift card at #CLEtweetup. I would've been back anyway, but I definitely will now! pic.twitter.com/8AKB6f8jff

The #CLEtweetup tonight had some fun at @BangCleveland & gr8 raffle prizes. I look forward to the next one. https://t.co/ByBEPuDx7r

@sos_jr I'm happy to see that you are following us! I hope we will see you often @PunchBowlCLE!

@bangcleveland we saw a photographer at the cle tweetup, where are all of his photos located??

@WestSideBrian They should be posted @clevelanddotcom. We'll post a link when they go up. Thanks for coming to #CLEtweetup!

I highly recommend you attend a future Cleveland.com #CLEtweetup -- they are a lot of fun.

If you want to learn more about #CLEtweetup, here are links to my past blog posts: