On the evening of Tuesday, September 8, 2015, we knew we both needed to be on the second floor of the Terminal Tower. A grand opening was scheduled. The event by itself could have been just another gathering of talented people that we often attend in Cleveland, but what was opening represented much more -- the foundation for future Cleveland entrepreneurship in a centralized hub connecting startups to critical resources. 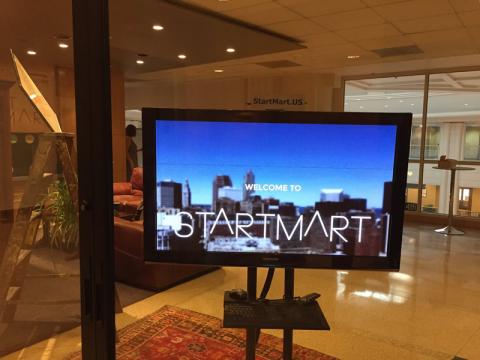 Taking a crowded elevator up to the Terminal Tower second floor with many StartMart (@StartMartUS) supporters, along with reporter Dawn Kendrick (@DawnKendrickTV3) and her camera crew, we could feel the excitement in the air.

At 11: New start-up companies that are choosing Cleveland https://t.co/LOZHn5IlAi

Here are our photos from the evening.

Arriving at Cleveland StartMart, Stuart confirmed with Flashstarts Executive Vice President Shannon Lyons (@ShannonCBDO) that what he thought was correct -- that StartMart's new space has a history of supporting small businesses in Cleveland.

Years ago, Stuart used to go to meetings in this space when he was a COSE (@COSEsmallbiz) Ambassador, and later for some OHTec (@OHTec_Nellis) meetings. Whereas COSE's purpose is to support existing businesses, StartMart is an incubator for creating new businesses. Stuart remembered that the space included the third floor. Shannon indicated that while the current emphasis will be to only house startups on the second floor, StartMart's lease with the Terminal Tower will allow for future growth to the third floor. It is an ideal situation for new businesses.

The Cleveland StartMart is a dynamic entrepreneurship hub connecting startups to critical resources.

Now just a concept, the StartMart vision is to transform Suite #200 of Terminal Tower into a startup hub, similar to Cincinnati’s Cintrifuse or Boston’s ID Building. This hub will house our city’s existing startup assets and new resources such as “StartPods”. It will create an atmosphere where startups are empowered to test, iterate, fail and scale.

The creation, growth, and demise of all types of businesses are occurring at an ever-increasing pace. The opportunity to leverage these trends for wealth generation, job creation, and economic development has never been greater. Help make StartMart a reality by declaring your support and taking action. 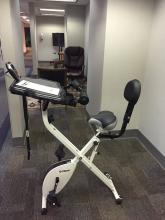 After the ribbon cutting, we were free to explore the new space, and network with attendees. Most of the rooms and offices are not furnished yet. Some of the shared spaces we saw included: 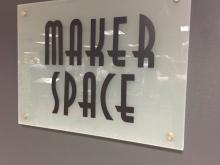 One of the cool things StartMart had set up was a room for all attendees at the grand opening to share their ideas. Shannon explained to us that there will continue to be a hub space like this to encourage the sharing of ideas among the startups. It is key to the success of this program to maintain an environment where creative ideas are shared.

Since Flashstarts (@Flashstarts) is one of the first tenants, the Flashstarts 2015 Accelerator Class is currently occupying some of the StartPods (offices). 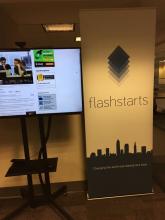 We provide details about the current accelerator class in our @Flashstarts Demo Day 2015 - #FSDDay blog post. The following listing links directly to more information about these Cleveland startups:

We want to thank We Can Code IT (@WeCanCodeIT) Founder & CEO Mel McGee (@MelKMcGee) and Outreach Director Shana Mysko (@ShanaInCle) for taking us on a tour their new space, and providing us with information about the shared spaces. In addtion to We Can Code IT space at LaunchHouse (@LaunchHouse), StartMart will make it possible for them to expand their coding boot camps targeting women, African-Americans, and Hispanic Americans.

In addition to seeing the offices of the Flashstarts startups, we also met some of the other entrepreneurs who are among the first to occupy space at StartMart:

To learn more about the resources provided at StartMart and some of its history, we recommend you read StartMart is set up to be one-stop shopping for entrepreneurs: Tech Czar Talk by Michael C. DeAloia (@TechCzarCLE) on Cleveland.com (@ClevelandDotCom). The article states that: "The amenities within the office include a 1-Gig fiber connection from OneCommunity that eventually will grow to a 100-Gig fiber pipe." I was excited to read this, since I had not heard that OneCommunity (@OneCommunity) would be expanding their 100-gigabit fiber network to Cleveland's Public Square. To learn more about how OneCommunity is making Cleveland the first city in the United States to have a commercially available 100-gigabit fiber network, please read our December 3, 2014, blog post: Cleveland To Become First 100-Gigabit Fiber Network City! 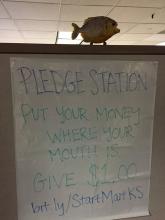 Last week, on September 7, 2015, we published a blog post about Flashstarts Demo Day 2015, in which we mentioned the announcement by Charles Stack (@CStack) of an "...opportunity to support the new Cleveland StartMart (@StartMartUS) at: http://bit.ly/StartMartKS"

We made it! @StartMartUS raised $10k on #Kickstarter & we'll be keeping it open. Thank you to our supporters. http://t.co/aAWR727lbZ

And while we were writing this blog, more good news:

Here are Stuart's @sos_jr tweets/retweets about the SmartMart opening and related activities. Be sure to read them to learn more about SmartMart, and also see photos from the event.

Please retweet those that you find interesting. Retweeting is one way to help spread the message of entrepreneur growth in Cleveland.

.@StartMartUS, a 1-stop-shop for entrepreneurs, is a big bet on the importance of #startups in #Cleveland. http://t.co/gPDhhkumtw #ThisIsCLE

Be one of the first to see our #CLE #startup hub first-hand! Our Grand Opening event is 9/8 from 4-8pm: http://t.co/dgmRnc2aCj

.@StartMartUS is building a hub for #CLE #entrepreneurs & #startups of all kinds. Pledge your support: http://t.co/WLXiNbppIV

It's not too late to register for tomorrow's Grand Opening! Celebrate the launch of our #CLE #startup hub: http://t.co/dgmRnc2aCj

Our Grand Opening is today @ 4p. Will you attend to break-ground on #Cleveland's #startup hub? http://t.co/dgmRnc2aCj

Doors are open at the StartMart Grand Opening, let the festivities begin! #StartMartGO

Great turnout at our Grand Opening- we hope to see conversations & ideas like this everyday! #StartMartGO pic.twitter.com/zSfF9kjwTh

Had a great time meeting the supporters of @StartMartUS tonight! #cleveland #coworking #startups

We just backed @StartMartUS - Rebuilding Cleveland One Startup at a Time on @Kickstarter http://t.co/PBk1KEYiQf

Thanks @CLE_EDNichols & all of our other awesome supporters for making last night possible! #StartMartGO https://t.co/5I69FC22bw

#ThisJustIn: Coverage of our Grand Opening is scheduled to be on @wkyc News Ch3 at 11pm tonight - tune in! http://t.co/pgcluCEC42

@StartMartUS We just posted our web story: http://t.co/GTcndnafCJ The video should be up in about 30 minutes!

At 11: New start-up companies that are choosing Cleveland https://t.co/LOZHn5IlAi

We made it! @StartMartUS raised $10k on #Kickstarter & we'll be keeping it open. Thank you to our supporters. http://t.co/aAWR727lbZ

@sos_jr Thanks! It was great to see you, too!

We made it! Our #Kickstarter campaign reached $10k & we'll be keeping it open. Thank you to our #CLE supporters!! http://t.co/uZQ9LisgzU

.@clevelanddotcom reports: We received $40K from @CLE_EconDev & are raising our #Kickstarter goal to match the funds. http://t.co/jdgPDOixjE

If you are interested in Flashstarts, located at StartMart, please read our @Flashstarts Demo Day 2015 - #FSDDay blog post. It will give you a good overview of the types of business startups that can occupy StartMart.

Here are some related blog posts they you might find interesting: