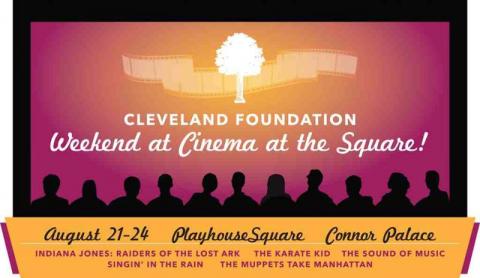 Thank you, Cleveland Foundation, for another great centennial gift to the community! We enjoyed seeing Singin’ in the Rain on August 23 , 2014, at the world-famous PlayhouseSquare. To celebrate the 100th anniversary of the first community foundation in the world, at the second largest theatre district in the United States and world’s largest theater restoration project, says a lot for Cleveland! 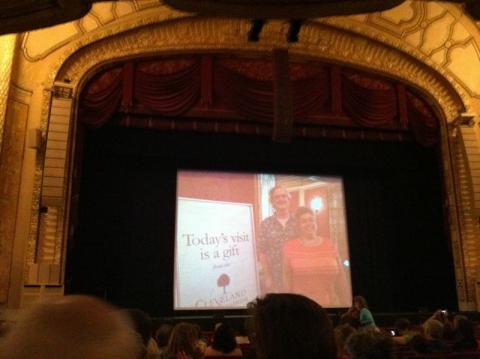 We were even on the big screen!

Details about the Cleveland Foundation's (@CleveFoundation) August centennial gift to the community of nearly 2,700 free tickets to each of five classic film screenings at PlayhouseSquare (@PlayhouseSquare) can be found on their website at: ClevelandFoundation.org/Cinema

Why Singin’ in the Rain? 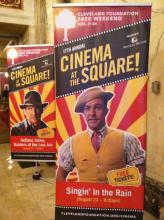 We decided to see Singin’ in the Rain since it has some history with us. When we were first dating, we went to another grand old Northeast Ohio theatre to view some classic films. We have fond memories of seeing a special double feature at the Akron Civic Theatre (@AkronCivic) of the 1927 film The Jazz Singer, and Singin’ in the Rain. If you know the stories, you will appreciate the connection between these classic films. 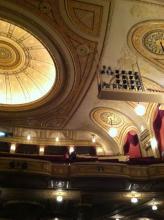 If you are interested in learning more about the world’s largest theater restoration project, we invite you to read these two articles on the Cleveland Foundation's special ClevelandFoundation100.org centennial website.

What happened in Cleveland was truly revolutionary! 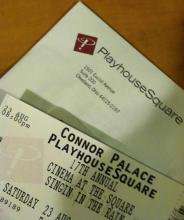 Having been to the Palace Theatre many times, we were surprised when we received our tickets to see the name "Connor Palace." We want to thank the staff person that we talked to at the theatre who explained the new name, and @PlayhouseSquare for sending us a link wtih more information.

You can lean about the PlayhouseSquare capital campaign and the Connor Palace renaming in this June 20, 2014, press release:

2014 was the 17th Annual Cinema at the Square. If you missed this special Cleveland Foundation event, you can watch the PlayhouseSquare Cinema at the Square web page for information about next year's shows. Tickets in 2014 were only $5 each, and less with a FlixTIX pass.

Here is additional information about the 17th Annual Cinema at the Square:

The beautiful Connor Palace will once again return to its movie-house roots to host the 17th Annual Cinema at the Square, presented by Medical Mutual, featuring some of the most popular films from Hollywood’s Golden Era of the 1930’s up through the 1980's. All films are screened on a massive 20’ high x 47’ wide Hurley Super Glo projection screen; the largest non-Imax screen in Ohio! Grab your seat early and catch a nostalgic organ recital on our fully restored 1928 Kimball organ, plus a variety of short films and classic cartoons before each film. Get the complete retro cinema experience and watch your favorite films with friends and family the way they were meant to be seen.

Here are our @sos_jr tweets and retweets. Much of the fun of being on Twitter is to see other what other people attending an event share.

Get your FREE classic cinema tickets before they're gone: http://t.co/WGw1VDldV9 #TCF100

Brushing up on classic cinema? Still FREE tix available this weekend for Karate Kid & Singin' in the Rain #dtCLE: http://t.co/52rGS6ul5o

We're giving away FREE tickets to see @ralphmacchio in the classic Karate Kid Friday @playhousesquare. Check it out: http://t.co/52rGS6Lo7o

Learn about our history of support for #CLE's @playhousesquare, the 2nd largest performing arts district in the U.S.! http://t.co/xhmCkd2NHx

These are a few of my favorite things...Who's coming to the Sound of Music this afternoon? #TCF100 #teamMaria #WeDontNeedAGoverness

The #CLE is alive, with the sound of free gifts #TCF100 pic.twitter.com/8BIve8Fr2l

Excellent! Even costumes from "The Sound of Music." #tcf100 pic.twitter.com/GYly0zc1BU

Back from intermission! Need to make a sequel - The Sound of Cleveland! @playhousesquare pic.twitter.com/Gs1cR9VNhX

@sos_jr @DowntownCLE @CleveFoundation @playhousesquare the ambassadors are a real asset to downtown. They make a great place even better

.@LoriAGrim yes, I strongly agree w/ U. I always thank a @DowntownCLE ambassador, when I see one. cc: @CleveFoundation @playhousesquare

.@playhousesquare thank you so much for the information about Connor Palace Theatre & your Capital Campaign. http://t.co/WuLH5HDdHk

.@playhousesquare at @CleveFoundation event, was able to talk to your staff. They very helpful w/ info about naming of Connor Palace Theatre 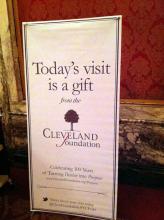 It is exciting to hear that more is coming!

It has been such a great and busy year of centennial events! At the movie showing, it was announced that four more events are coming. We are excited! 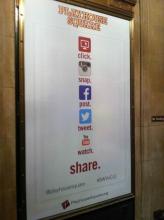 Stay up-to-date by following @CleveFoundation and the centennial #TCF100 hastag on Twitter.

To learn more about our experiences at PlayhouseSquare, please see our blog posts:

We are looking forward to more fun at PlayhouseSquare!

What a lovely recap of this

What a lovely recap of this fantastic event!