In December 2011, Jan Dregalla (www.ArtByJan.com @JanBits) and I were asked to do a presentation on how to use web fonts. This font design meeting was an outgrowth of a talk that two other CDPUG members and I did on January 27, 2011, called "Web Design, HTML and Beyond." At the end of the January 2011 meeting, there were many questions about the lack of control of fonts on websites, so CDPUG Program Director Spike Radway (@SpikeRadway) solicited our assistance to present: Web F​ont Design: You Don't Have To Be Angry Anymore

The following are the notes and slides from my part of the meeting, plus some links/materials beyond what my presentation time would permit.  If you want a PDF version of my Web F​ont Design: You Don't Have To Be Angry Anymore slides, please select this link. Jan's part of the presentation is the main focus of the talk. This is because while it is now easy to add web fonts, it is now also easy to make bad font choices. Here are Jan's slides as a PDF file. 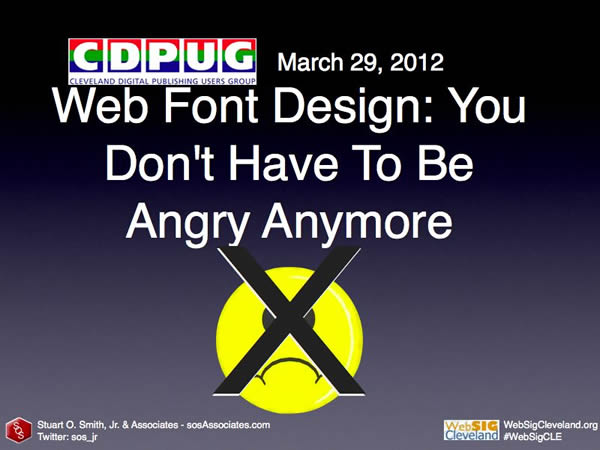 This talk showed a brief history of font use on websites, and showed how easy it is to add web fonts to websites today. I would be interested in doing a more in-depth talk at a future WebSigCleveland.org meeting in the fall. 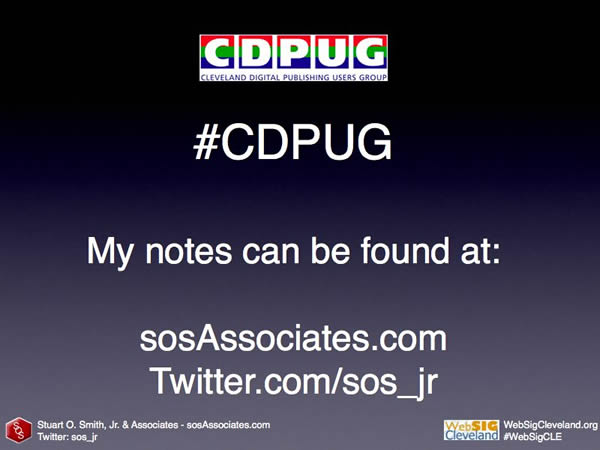 During the meeting, I tweeted important links and some resources beyond the talk. I also encouraged others to add to the discussion online via Twitter using the hashtag of #CDPUG.

Here are the Tweets with links for your use:

Web Font Design: You Don't Have To Be Angry Anymore w/ @janbits & me at @CDPUG4sq.com/H5taVO #CDPUG twitter.com/sos_jr/status/…

Know of ppl in #CLE that does a lot work w/ web fonts? I would love to do a follow up more tech talk in fall at WebSigCleveland.org. #CDPUG

My notes from @CDPUG Web Font Design talk will be on my sosAssociates.com blog. #CDPUG

Early web fonts was like: "car painted any color...so long as it is black" -Henry Ford 1918 en.wikipedia.org/wiki/Henry_Ford #CDPUG

At #CDPUG right now sos_jr is giving the history of font use in web design.

Look at: @GoogleFonts; @Typekit; @FontSquirrel at @CDPUG mtg "Web Font Design: You Don't Have To Be Angry Anymore" #CDPUG

How To Use @GoogleFonts In Your Next Web Project & Why You Should makeuseof.com/tag/google-fon… via @MakeUseOf #CDPUG

#CDPUG @SpikeRadway is wearing the coolest font shirt. Wish I had one.

Watch "Font Conference" by @CollegeHumor in @JanBits presentation at @CDPUG. Watch this! It is fun! youtu.be/i3k5oY9AHHM #CDPUG

Good job @Janbits on your type presentation at #CDPUG

Much appreciated! Nice to have you there. RT@4debbiekennedy: Good job @Janbits on your type presentation at #CDPUG

Fun learning, apps too. RT“@sos_jr: Learning about "The Font Game" via @JanBits at @CDPUG mtg. Play online at: fontgame.ilovetypography.com #CDPUG” To quote Henry Ford from his autobiography: "Any customer can have a car painted any color that he wants so long as it is black." Thinking of early computers and the first use of the Internet made me think of this quote. The user had to be happy to just have the internet as a new tool; they could not control how things looked.

Monospaced fonts, which had a fixed width between letters, was the standard for the first computers & computer terminals. These early computer screens could fill your appetite for knowledge, but were not as "tasty" (note empty ice cream cone) as today's computers. 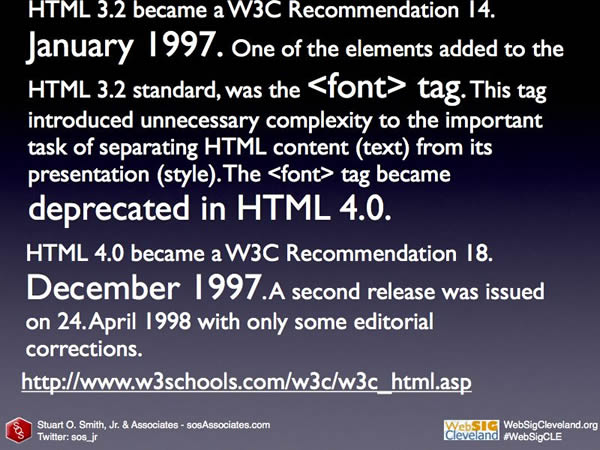 I recommend reading over the History of the World Wide Web section on Wikipedia. I found it interesting to see the orginal writing from August 6, 1991, from Berners-Lee, introducing the idea of the World Wide Web project on the alt.hypertext newsgroup. The focus was on the importance of an easy way to share information. This is way before the ideas of design that are the focus of today's talk.

With the January 14, 1997, recommendation by the W3C for HTML 3.2 to include the <font> tag, website developers now had the abilty to change the fonts used on webites, but... 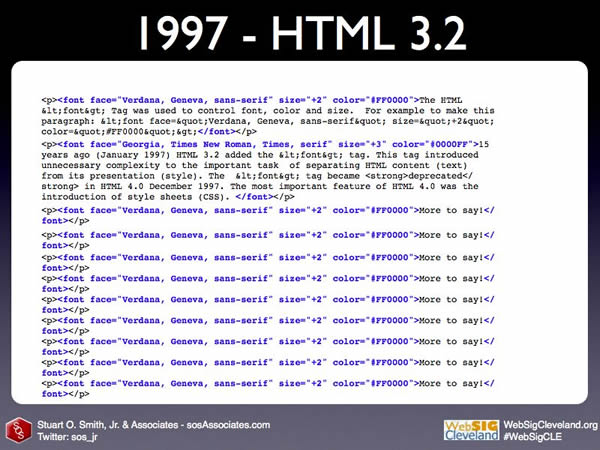 Note in the graphic above how the amount of HTML markup to declare the font is more than that of the content it modifies.  The W3C leadership knew that there had to be a better way.

From personal experience, I can remember that for what felt like a long time after the <font> tag became deprecated, it was still being used.  This was because it was supported by the browsers of the day (unlike the newer methods). Also, I remember that products like Macromedia (now Adobe) Dreamweaver still used the <font> tag in the early 2000s. CSS has the advantage of making it easy to update the design all your HTML pages from a remote CSS file, plus using responsive website design techniques, a website designer can have the design change based on the device being used. For example, a smartphone, a tablet, and a laptop can all get different design layouts. sosAssociates.com is designed using this technique. Isn't it exciting!!! (sarcasm) In the early years of CSS, web designers now had more than one "flavor" of font to pick from that could be controlled in the CSS file. (Designers are never happy -- now that the issues with the HTML <font> tag were gone, they were concerned about the limits of available fonts in CSS.) This brings us to where we were at the CDPUG meeting: "Web Design, HTML and Beyond." Designers historically have been limited to the fonts on the local computers of the website visitors, with no control and only a limited number of choices. Luckily, this is no longer the case.

Here is a 2008 article about fonts common to all versions of Windows & Mac. In late 2010, a revolution had begun! New font services offered many opportunities! Take a look at this article from Smashing Magazine: Review of Popular Web Font Embedding Services

This article provides you with links and reviews of the top font embedding sevices. Thousands of tasty fonts to choose from! At the CDPUG meeting, I discussed how to use two font embedding services and a font download system: Go to Google Fonts to learn the five easy steps to add their web fonts to your website.

The Google Fonts website makes it easy, but if you want additional assistance, check out this article: How To Use Google Fonts In Your Next Web Project & Why You Should Here is an example of Typekit fonts. These are not supported yet in most browsers, but hint of future possibilities : Here are some CSS1 text properties that now have more significance, since website designers can finally control which fonts are used on websites: Thanks for great collection...This font will be helpful for my web design process.