"The ayes have it" - Historic FCC Vote on Net Neutrality 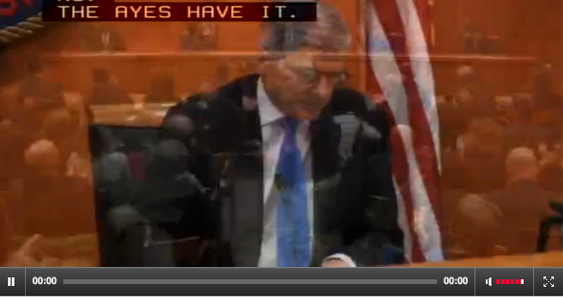 This is my screen capture from the FCC webcast, taken at the very moment
the historic vote was announced. The text is the official FCC closed captioning.

"The ayes have it" - here are my @sos_jr tweets and retweets from this most historic vote by the Federal Communications Commission (FCC) (@FCC)!!!

Despite snow, the @FCC Open Commission Meeting will start at 10:30 am ET as scheduled. Details: http://t.co/DO25YCfefu.

Legend alert: @stevewoz in the audience at @FCC today.

Just heard that Director of the World Wide Web Consortium, @timberners_lee, will be speaking at the @FCC hearings: http://t.co/HcTmbSuCgS

.@MClyburnFCC the framers of Constitution would have been proud of the outpouring of public participation in #NetNeutrality docket.

.@TomWheelerFCC says "You can't say you are for broadband, and then put limit on who can offer it." #ThatDogDontHunt #HellYes #fcclive

Panorama of the meeting room at the @FCC discussing future of broadband in the U.S. #netneutrality #munibroadband pic.twitter.com/urbmnv8qnj

.@MClyburnFCC this is our 3rd bite at the #NetNeutrality apple, we must get it right this time.

Who benefits from #openinternet -- citizens, communities, companies, creators,countries ? In short, everyone. #netneutrality.

.@MClyburnFCC shocked at "how much of the rhetoric... is divorced from reality." Esp. wrt claims that #NetNeutrality =rate regulation

.@timberners_lee, creator of World Wide Web, calls for #TitleII, #NetNeutrality should be basic market condition that we protect #FCCLive

.@MClyburnFCC lastly thanks the American people & their participation in the #NetNeutrality debate.

.@AjitPaiFCC With all due respect, U don't seem to know what U are talking about! #NetNeutrality http://t.co/1q8Z2nTde3 Who do U represent?

Apple co-founder Steve Wozniak is in the house for the @FCC #NetNeutrality vote http://t.co/V5LAjm0Pvd pic.twitter.com/GMXrEv9eTe

Apple announcing in the middle of @AjitPaiFCC's longwinded justification for voting against Title II is p awesome.

Hello @Comcast , I have a complaint about your employee @AjitPaiFCC. Please respond.

Oh no. @mikeofcc warns us that he's going to make a long long speech even longer than his last one that got him on @LastWeekTonight

The #OpenInternet’s future is at stake. We cannot afford to delay finally adopting enforceable rules to protect consumers & innovators.

It’s time to put in place rules to preserve the #OpenInternet that has become an indispensable part of our daily lives. #TitleII

.@DataFoundry, long time Republican Title II supporters were one of first ISPs in the country. http://t.co/VRxZOY6zxB

Zzzzzz... Oh? @mikeofcc is still speaking? We get it. You're against the #openinternet CC @FCC #netneutrality

.@TomWheelerFCC "The Internet is too important" to leave to the control of broadband providers. #NetNeutrality pic.twitter.com/bPO5k01tqC

.@TomWheelerFCC "today is a red-letter day" for the Internet, users and businesses. #NetNeutrality

And the @fcc votes to preserve an open internet! #NetNeutrality pic.twitter.com/si2K81f6ap

FCC passed #netneutrality rules today. Look back at the events that led up to the decision. http://t.co/n860fmFOrm pic.twitter.com/GTvf58w1aY

The following is the official FCC broadcast and text from their website: fcc.gov/events/open-commission-meeting-february-2015

The FCC held an Open Meeting on Thursday, February 26, 2015, on the subjects listed below:

If you read my September 1, 2014, Take Action! @FCC and #NetNeutrality blog post, you know that I believe that the support of net neutrality is an important issue.

Here is a direct link to the section of my Take Action! @FCC and #NetNeutrality blog post where you can see what my Senators (Sherrod Brown and Rob Portman) , and my Congresswoman (Marcia Fudge), wrote back to me. If you like what they say about supporting net neutrality, then please thank them for their ongoing support. If it was not clear where they stand on the issue, please let them know that you need them to take a very clear stand for net neutrality.

Members of Congress for all states can be found at:

Use this map to find your congressional district

You can embed this map from:
GovTrack.us/congress/members/map

For Ohio, call or write:

Where I live, my US representative is:

If you need more information, and have not read my earlier blog posts, I provide links to them here.